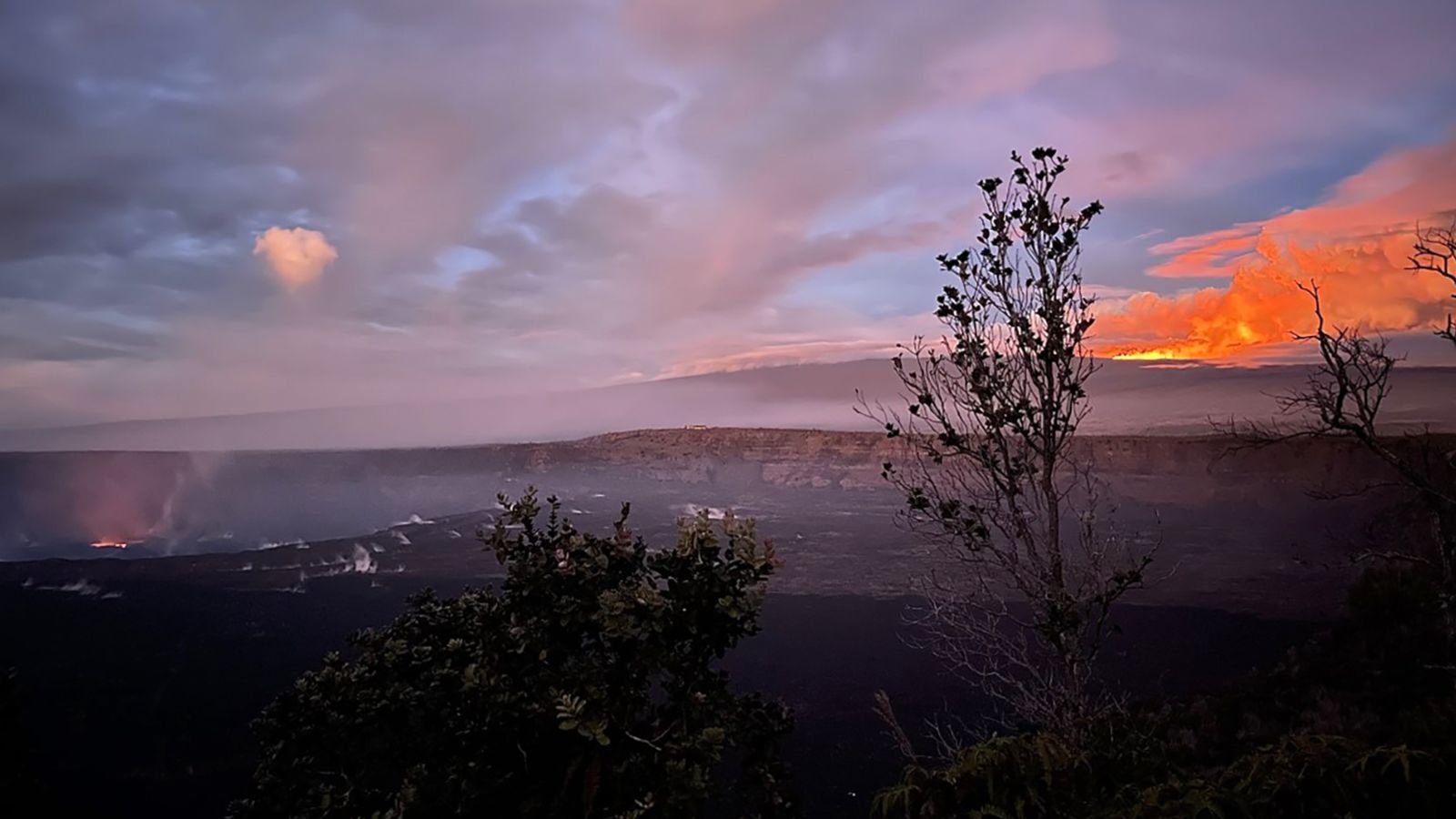 See the impressive lava flows of the Mauna Loa volcano 1:14

(CNN) — As the sun rose Monday in Hawaii Volcanoes National Park, the sky was ablaze with the glow of two erupting volcanoes.

The world’s largest active volcano, Mauna Loa, erupted for the first time in nearly 40 years on Sunday night, joining its neighboring volcano, Kilauea, which has been erupting for more than a year. The rare double-eruption event is expected to draw an influx of visitors eager to see its molten flows, the national park said in a Facebook post.

Just 33 kilometers apart, the two volcanoes had not erupted together since 1984, the last time Mauna Loa erupted. At this time, they do not threaten homes or nearby infrastructure, the park said, although state health officials warned of potential air quality impacts.

Video from thermal cameras: this is how the eruption of Mauna Loa in Hawaii began 0:37

Lava fountains as high as 200 feet were flowing from Mauna Loa, the US Geological Survey said late Monday, though most remained within a few feet.

The eruption is currently concentrated in the Northeast Rift Zone of Mauna Loa, where lava flows from at least one division of the volcano, according to the US Geological Survey. Volcanic gas, fine ash, and Pele’s Hair (strands of volcanic glass) could blow away in the wind, the agency said.

Officials are keeping a close eye on the site to monitor any developments.

“Based on past events, the early stages of an eruption in the Mauna Loa rift zone can be highly dynamic, and the location and advancement of lava flows can change rapidly,” the geological survey said in an update Monday. .

Although there is no immediate risk to communities, the Hawaii National Guard is ready and the state Emergency Management Agency has activated its emergency operations center, said Maj. Gen. Ken Hara, adjutant general for the state Department of Defense. of Hawaii during a press conference.

Kilauea, a much smaller volcano located on the southeast side of Mauna Loa, has been erupting since September 2021, though its lava is confined to its crater, according to the US Geological Survey. When the incredibly active volcano entered Erupting for several months in 2018, it spewed lava into the Leilani Estates neighborhood, destroying more than 700 homes and displacing residents.

“While an eruption is an exciting experience, keep in mind that you are observing a sacred event. The Kīlauea and Mauna Loa volcanoes are wahi kapu (sacred landscapes) surrounded by historical sites,” the park’s website says.

The Mauna Loa eruption caused the closure of the Mauna Loa Forest Reserve and the Kipuka ‘Ainahou Nēnē Sanctuary for at least 90 days, the Division of Forestry and Wildlife of the Hawaii Department of Lands and Natural Resources (DOFAW) announced Monday. .

The division expressed concern that if the lava changes course and flows into the Puʻu Makaʻala Natural Area Reserve, years of land restoration work after previous eruptions could be destroyed.

A “less than quarter-inch trace” (less than 6 millimeters) of ash fall could accumulate on some parts of the island, the National Weather Service in Honolulu said Monday.

The Hawaii Department of Health issued an alert Monday warning residents to prepare for air quality impacts, saying the eruptions could cause “vog conditions, airborne ash and sulfur dioxide levels.” that increase and fluctuate in various areas of the state. ”

‘Vog’ is a term that refers to volcanic smog, state officials reported.

Sensitive groups, including children, the elderly and people with respiratory conditions, should reduce outdoor activities, and reduce exposure by staying indoors and closing windows and doors, should vog conditions develop, he said. the health department.

Southwest Airlines halted operations at Hilo International on Monday due to the eruption, the airline announced. It has canceled five flights to and from Honolulu, Southwest said.

“Passengers flying into Hilo International Airport (ITO) or Ellison Onizuka Kona International Airport at Keahole (KOA) should check with their airline before proceeding to the airport due to volcanic activity at Mauna Loa,” a notice from the agency clarifies. State Department of Transportation.

The US Federal Aviation Administration is “closely monitoring the volcanic eruption and will issue air traffic advisories once the size of the ash cloud is determined,” it said in a statement.