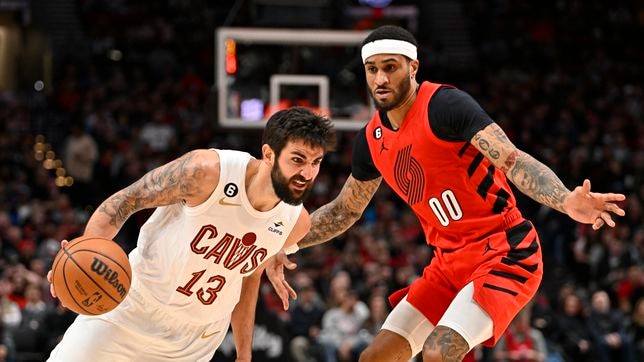 On December 29, 2021, Ricky Rubio went from heaven to hell and said goodbye to basketball courts indefinitely. He tore the anterior cruciate ligament in his left knee, one of the two biggest injuries in sports and basketball (along with the Achilles tendon) and stayed in dry dock for the remainder of the season. Goodbye to the NBA basketball course and, of course, to the Eurobasket with Spain, whose golden match he had to watch from his house. Fateful months for a player who was included in the transfer to the Pacers for Caris LeVert, but who never set foot in Indiana and left with the promise under his arm that he would sign again with the Ohio entity in the summer, when he would be a free agent without restrictions. On July 1, it did, for 3 years at a rate of 18.3 million dollars. And on January 13, 2023, 380 days after his injuryhas played a game of basketball again. Fancy.

The Cavs won to celebrate the return of one of the heavyweights in their locker room, one of the on-court extensions of the voice of JB Bickerstaff alongside his teammate Kevin Love (whom he played with in Minnesota). They did it with difficulties, responding to the umpteenth exhibition without a prize by a Damian Lillard who was the absolute protagonist of the night: 50 points, with 16 of 28 shooting from the field, 5 of 13 on three-pointers and 13 of 15 on free throws. It was not enough for those from Oregon, who have no arguments beyond their brilliant point guard and are shipwrecked on both sides of the track: they lost the fight for the rebound (44-36), distributed fewer assists (28-17) and lost 16 balls. In addition to wasting an advantage that came to be 14 points. All wrong.

The fantastic trio of the Cavs was formed by Donovan Mitchell, Darius Garland and Jarret Allen: 26+5+5 for the first, 20, with 10 assists, for the point guard and 24+10+6 for the center. Evan Mobley (17 + 8) and Isaac Okoro (11) completed the double figures in the entire starting five of the Cavswho took the game thanks to a spectacular run in the last quarter (22-32), turning the score around (91-87 in favor of the Blazers at the end of the third period) and taking a victory that leaves the Oregonians out of the play-in (19-23, after a 5-0 start) and Ohio’s Eastern quarterfinalists, half a win away from third place, one from the second and four from the unattainable Celtics. comfortably installed in the first.

And Ricky played, of course. He did not do it like the day of his injury against the Pelicans, when he was putting together one of the best performances of his particular season (27 + 13 + 9 before getting injured), but he played well and safe in the 10:27 he was on the court, also being the top scorer of the second unit: 9 points, 3 rebounds, 1 assist and no losses. Much encouraged by his teammates (he is one of the most beloved players in the locker room), Ricky was happy again on a basketball court and demonstrated it in the short time he was with the ball in his hands. 380 days later, the 32-year-old point guard returns to stay in a team that wants to fight a lot in the Eastern Conference, which has a good coach, to a star, to young and promising players and, now, also to a luxury veteran with a fantastic career in the NBA and an extraordinary desire to conquer the world. His name is, you know, Ricky Rubio. and it’s back.