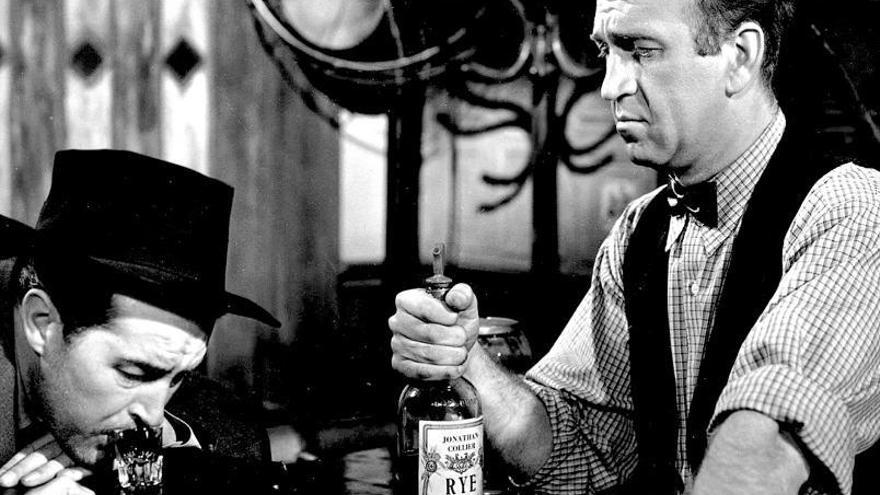 “First glass at half past nine. This morning I lasted until eleven twenty-two », John Cheever points out in one of the most visual passages in his diary. As he records every movement of his wife in the kitchen, waiting for him to clear the area to pour himself a drink, readers can feel his thirst: few scenes are more descriptive of anxiety – in real time – for drinking. However, an overwhelming number of books of different genres (novels, short stories, essays, diaries) account for the dependence, often fatal, that attracts writers to alcohol.

One of the most accurate definitions of this close relationship between literature and alcoholic passion was given by Baudelaire when talking about Edgar A. Poe’s fondness for drinking: he said that his death had been almost a suicide. The French poet -also fond of alcohol and other drugs, as is particularly stated in his Artificial Paradises- clarified: «[Poe] He drank not gluttonously, but barbarically, as if he were fulfilling a homicidal destiny. To kill something that he had inside, a worm that he could not kill ».

Finding that worm – the anxiety that leads to addiction in artists – is what has led writers and researchers from different periods to try to approximate some theory.

In an attempt to understand her own penchant for alcohol dependency, in The Trip to Echo Spring: Why Writers Drink (Attic of Books, 2013), Olivia Laing focuses on six of the American authors who most embodied and thematized her drunk: F. Scott Fitzgerald, Ernest Hemingway, Tennessee Williams, John Berryman, John Cheever and Raymond Carver. In addition to the friendship that some had with each other, the author discovers certain repetitive patterns: “Everyone lived tormented by self-hatred and a certain feeling of inadequacy,” among other similarities such as the wanderlust, family problems, and promiscuity. An attractive and well-written book that addresses the subject in sufficient depth to better understand the intimacy of these creators.

Alcohol and literature (Menoscuarto, 2017), by Javier Barreiro, also goes along this line, with the difference that the Spanish author starts from the relationship of the Greeks with alcohol to later review European and American writers, including Spanish-speaking ones, from different times given to ethyl abuse. He notes that “seventy percent of the Nobel Prize-winning American writers had problems with alcohol or used it as a source of inspiration.” According to Barreiro, among artists, writers are the ones who suffer most frequently from depression and neurosis, which is why alcoholism has an incidence three times higher than among painters and musicians.

Both Rosa Montero in her latest book, The danger of being sane (Seix Barral, 2022), and Toni Montesinos in The wounded letter: suicidal authors, drug addicts and insane (Berenice, 2022), agree with Barreiro and compile a list of famous dipsomaniacs that slowly self-destructed, when they didn’t end in suicide.

Otra (Tránsito, 2022), the latest novel by the Spanish Natalia Carrero, is a deceptively short book. Beneath an apparently simple style and everyday scenes, not only various levels of reflection are rescued, but also a poetic acupuncture full of images: “The eye remains reading the silence”, “The voices have many points of view”, “I went out to the street with a growing heart, the amplification of its heartbeat was heard from me». The memories of this fictitious drunkard are read as if one were picking up shards of glass scattered on the floor, those of a broken glass: be careful, it contains sharp phrases and very cutting humor.

In recent years, new titles narrated from personal experience on the problem of addiction -some translated- have been published in Spanish.

«He did not separate the thirst from the desire to be stunned. In any case, my father drank to liquidate himself, like me”, testifies the Argentine journalist and writer María Moreno in Black-out (PRH, 2017). “I drink excessively because I drink with my father’s mouth.” With a vibrant pulse, she embodies the chronicle of a harrowing slide into total darkness. It begins in childhood until it hits rock bottom in maturity: in the middle, the bohemia of the stages and cultural actors of Buenos Aires circulates in the 60s and 70s. At the most critical moment of addiction he even expresses: «Alcohol is a homeland . Alcohol is a God.” Winner of the 2016 Critics’ Award and highlighted by The New York Times, among others, Moreno’s book has become a benchmark for Spanish-speaking readers.

In Lagunas (Pepitas de calabaza, 2018), the American author Sarah Hepola writes: «I drank until I reached a place where I didn’t care [mis conflictos personales], but I would wake up a very worrying person,” like not remembering what I had said or done the night before at all. In the United States, it is very common to drink until you lose consciousness and you don’t care about anything, she explains, but in her case the alert allowed her to react in time to get out of the circle. You drink out of fear, remorse, shyness, you drink to silence the ruthless self-criticism that is undermining you, you drink to let go of all the controls without realizing that you are going to crash. It is the message.

Something quite similar is pursued by Leslie Jamison in The footprint of the days (Anagram, 2020), where he narrates his struggle to save himself from drinking, while reviewing the cases of many other writers along with artists who are victims of drama, such as Billie Holiday or Amy Winehouse. From the first pleasurable feeling of “loss” followed by the mental “blackout,” to landing in the creative writing program in Iowa, where great writers have been undone by drinking, and meeting Alcoholics Anonymous in a church basement, Jamison gives account of the cliff in which it has been rolling until the recovery that is never final.

Along the same lines is The Last Cup (Del Asteroide, 2020), by German Daniel Schreiber, who tells how most of his acquaintances, including his doctor, found it unnecessary for him to stop drinking, despite the fact that he could admit like alcoholic. The book is an honest confession, loaded with gravity, about all the self-deception mechanisms that allow us to continue drinking in a society that has completely normalized it. And a record also about the different aids that the author had to resort to in order to re-establish control over himself.

Like others mentioned here, the Englishman Lawrence Osborne hints that his alcoholism began as a spectator of the elderly, the mother and her family in this case, of whom he explains: «The person who drinks is closed in on himself and is incapable of untangle the threads that have closed around it. Specialized in writing about travel and alcohol, in To drink or not to drink (Gatopardo, 2020), he reflects a nomadic spirit in the chronicle of his itineraries through various cities after any drink within his reach but also seeking to portray the different social and religious customs around of the drink in the East as in the West. Between hotels and landscapes, he takes the opportunity to warn about the traps of alcohol as a stimulant and the harmful effects of addiction.

In Metaphysics of the aperitif (Periférica, 2022), the French writer Stephan Levy Kuentz wonders “Will alcohol be the ink of orality?”, after reviewing the favorite drinks of famous artists. «The aperitif is a stateless center of gravity made to ward off castrating slogans. It is that purgatory between day and night, night and death, a cerebral mess in which nothing fully exists… A slow-motion combat between oneself and one’s ideal image». Written with a captivating poetic pen, he takes us to that hour of sunset – the one he compares to purgatory – when the sun sets and consciousness is diluted in the dangerous solitude of drink. Magnificent translation.

Some of the mythical-classics on the subject of writing achieved from alcohol abuse are Under the Volcano by Malcolm Lowry; Confessions of a Drunkard, by British essayist Charles Lamb; The Legend of the Holy Drinker, by Joseph Roth; Scott Fitzgerald’s The Crack-up; Recovery, by John Berryman; Days without a trace, by Charles Jackson, made into a film by Billy Wilder. In As I Write, Stephen King admits that he did not remember how he had written Cujo, the story of the murderous dog, conceived while intoxicated.

Some extraordinary tales are The Swimmer, by Cheever, with its beginning “It was one of those Sundays in the middle of summer when everyone repeats: ‘I had too much to drink last night’.” Or those of Carson McCullers, Domestic Dilemma, where a man finds his wife daily in a state of drunkenness dangerous for the children, and The Instant of the Next Hour, with a partner after a night of excesses.

Many of them belonged to what Gertrude Stein called the Lost Generation, a term that became popular after the publication of Hemingway’s Paris Was a Party, and which included young authors around the First World War and the famous 20s ( Roaring Twenties) in the United States.

In tune, names from other latitudes ring out, such as Great Britain: Jean Rhys, James Joyce, George Orwell, Dylan Thomas, Kingsley Amis, among others ranging from English romantic poets to bloody Frenchmen, admirers of Poe, with Baudelaire a the head, in addition to Alexandre Dumas, Samuel Beckett, Verlaine, Rimbaud. Just like Dostoevsky, Chekhov, Pessoa.

“I like the slowest poisons, the most bitter drinks, the most powerful drugs, the most insane ideas, the most complex thoughts, the strongest feelings,” wrote the Brazilian Clarice Lispector, who also drank and smoked with relish. In the Spanish-speaking region there was no shortage of those who wrote with one hand while drinking with the other: Quevedo, Lope de Vega, Juan Carlos Onetti, Juan Rulfo, Alfredo Bryce Etchenique, Pablo Neruda, Mariano de Cavia, Juan Benet.

In her unsettling text El alcohol, included in La vida material (1987), Marguerite Duras completely deromanticizes the idea that getting drunk can be desirable for anyone: “Living with alcohol is living with death within reach.”