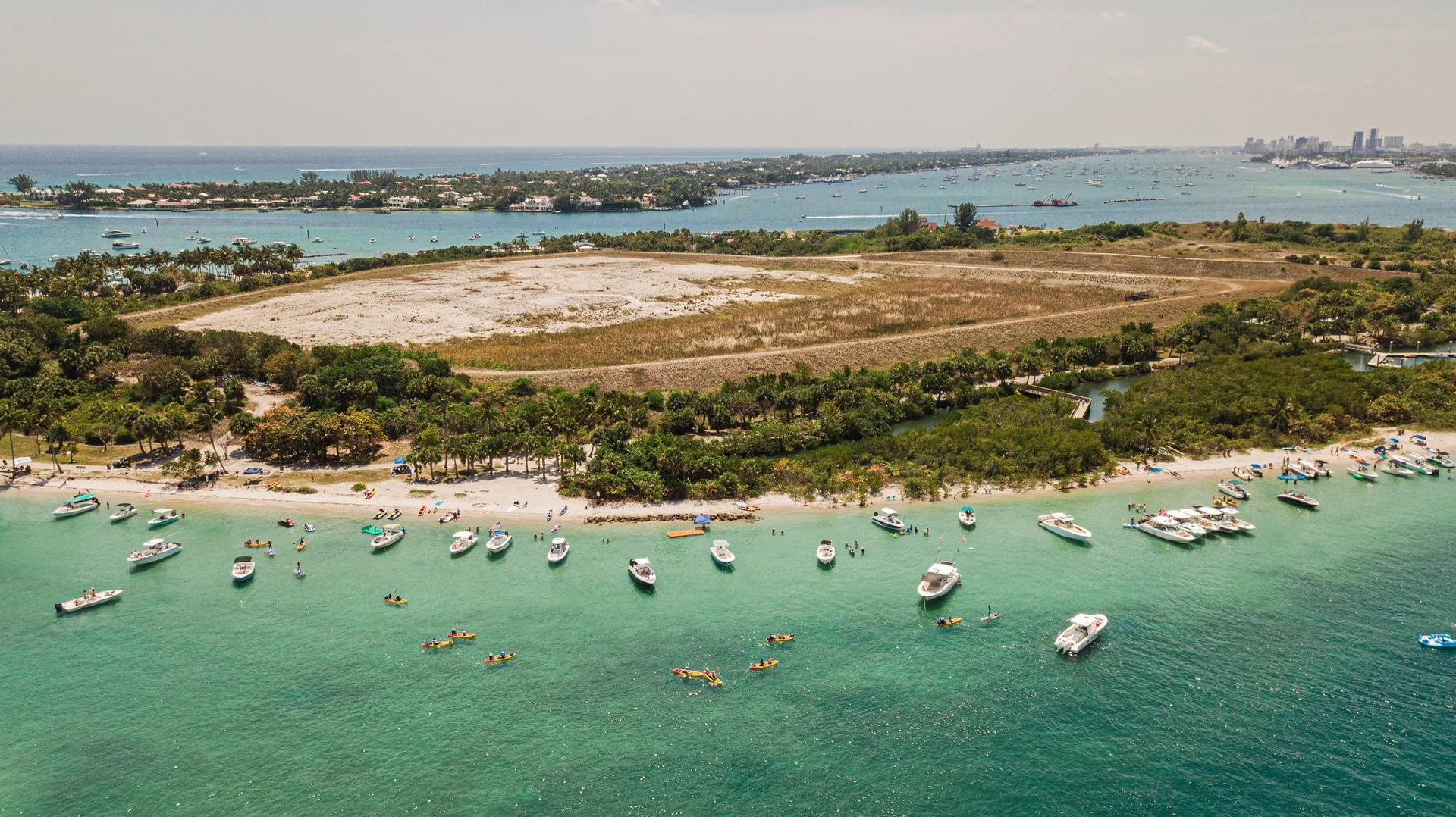 Due to the exuberant vegetation, the coconut palms, the white sand and the crystal clear water, it could be a Caribbean paradise. But it’s called Peanut Island and it’s in the middle of Palm Beach, an uninhabited island, with reefs that congregate thousands of fish waiting for snorkelers, and dark nights, to camp under the moonlight along with natural sounds: crickets, toads, or twigs that move with the passing of a squirrel. A few steps (or rather arms) are the mansions and golf courses.

You can only get here by water, which makes it exclusive and only known to locals who travel the bay with their own mobility. If an invisible bridge were built to the mainland, it would only take a five minute walk.

A speedboat leaves every 25 minutes from Riviera Beach Marina Village. The first boat leaves at 10 am. The name Peanut (peanut) could well be due to the shape of the island: it is very small and round, with a beach on 90% of its coast. But the truth is that it comes from the old plans to use it as a shipping terminal for peanut oil. It arose from the dredging of the channel in 1918 for the port of Palm Beach, which is opposite, until plans changed and only the name remained. In 2005 the island became a county park and has been upgraded in recent years.

The drive across the bay takes the blink of an eye. Maybe 7 or 8 minutes. The island is in front. Many would like to swim across, but it is not possible, explains the captain with a white beard and hair blowing in the wind. He also says that many cross by kayak or paddleboard (US$80 a day for rental). The last ferry leaves at 3:00 p.m., and it is best to go on a weekday, since the weekend is full of boats that anchor on the coast. The boat skirts the island and moors on the east side. As it is a county park, it is absolutely free and anyone who comes by their own means does not have to pay anything. Before disembarking, the captain advertises that soft drinks (US$2), snacks and water are sold on board. Once on the island there is nothing to stock up on. But nothing at all.

When setting foot on the island, the first impulse is to get to know it in its entirety. There’s a two-meter-wide path that runs along the beach and goes all the way around: one of the best the county has done. They are almost two kilometers in a circle on the only path that cuts through the intense green, and always leaves the beach to the left. A wooden fence encloses a fire pit and welcomes the 17 camping spaces. They do not have electricity but just a tap with running water at the entrance. There are also public toilets and showers. The cost is US$28 per night (US$31.64 with tax) and can be reserved 90 days in advance. Finding a place for the weekend is an odyssey, but there is always a place from Monday to Friday.

There is also a wooden bridge that crosses the mangroves, an abandoned white house with a red roof (the coast guard, soon to be remodeled), secluded beaches and a small marina where boats can moor. There are many picnic tables and grills along much of the route, some under barbecue areas made from palm fronds. It is advisable, during the journey, to take a dip to refresh the body.

In the northern part, a sandbank leads you to go even deeper into the water, and see up close some rafts anchored with sailors who, by the number of chirimbolos that hang from their boats and giant flat televisions, allow us to guess that they live there all year.

The boat meanwhile goes back and forth to the mainland. On each trip he brings between 15 and 20 people. They come down with little ice creams, umbrellas and even a dog.

The busiest beach is the one next to the pier, on the east and towards the southern tip. It has artificial reefs dotted about twenty feet from the shore that hide thousands of fish. About five or six breathers stick out of the water. The tide is rising and the color is becoming more turquoise, more fluorescent. The captain had already commented on it: the clarity improves a lot and it is the best time to swim or snorkel.

Underwater, Peanut Island could also be an exotic Caribbean island. Snorkeling equipment is as essential as sunscreen. You don’t just see fish, at times they are shoals, yellow and black, blue and yellow, silver. Not coincidentally, this site is considered one of the best snorkeling spots in Florida. The rocks, which function as artificial reefs, are much more populated on the outer side of the island. Skirting them will bring an even better surprise. Once the feat is done, you can see crabs, lobsters, shrimp or sponges. And also some living water, with which you should be careful.

The boat runs until 5:00 p.m. Too early for those who consider that it is the best time of day to enjoy the sunset on these beaches. But an essential fact to keep in mind is that once the last ferry leaves, the return is not easy. “If they stay, they will have to call our phone number, and they will be charged a US$100 fine,” the captain explains to all the passengers. Thus, with the exception of those who reserved a camping site, the last call of “all aboard” takes about 20 tourists.

It is then that paradise begins to empty. Just when the turquoise water is at its maximum splendor, and the sun gives golden caresses. Many disappointed people assure that, if there is a next time, it will undoubtedly be camping.

Time. The first boat leaves at 10 am and the last one returns at 5 pm