“There are so many things going through my head that have nothing to do with golf.” – Jon Rahm

In 1997 the Ryder Cup took place in Spain for the first time and so far only. At the notorious Valderrama Golf Club, Team Europe won the title despite a furious last-minute catch-up by the Americans. At the other end of the country, about 1000 kilometers north, a Spanish couple sat spellbound in front of their television set in the small fishing village of Barrika and cheered their compatriots Seve Ballesteros, Ignacio Garrido and José Maria Olazábal as they helped their team to the Ryder Cup title . Edorta and Angela made a decision that weekend: They would start playing golf themselves. At that point in time the couple had no idea what effect this decision would have on their son’s life.

Jon Rahm together with his proud parents in 2018 at the Open de Espana. (Photo: Getty)

The starting shot: From the Basque Country to Arizona

Edorta and Angela Rahm started golfing at the local club. After a few years they also took their son Jon – at the time of the Ryder Cup he was just three years old – to the golf course and he immediately fell in love with the game. At the age of 13, he watched videos of Miguel Angél Jiménez for hours. He was enthusiastic about the creative and risky game of his role model. Regardless of whether he was chipping on the green with the 4 iron and a correspondingly turned club face or performing other tricks, Jon Rahm tried to adapt Jiménez’s game.

His father Edorta in particular recognized his son’s talent early on and advised him to move to the USA after he left school. But nobody knew the young Basque golfer there, there were no serious offers from overseas universities and so Jon Rahm decided to study in Madrid. But after a year in which he continued to refine his game, the Basque got a call from Tim Mickelson, the brother of the legendary Phil Mickelson. At the time, Tim Mickelson was the head coach of the golf team at Arizona State University and received a hint from the circles of the Spanish Golf Association that this Jon Rahm was “a huge, undiscovered talent”. On the spur of the moment, he offered him a full scholarship at his university – rumor has it, without ever having seen him play – and Jon Rahm accepted.

When we arrived in the USA, the first problem was revealed: Jon Rahm hardly spoke a word of English. However, driven by the Basque’s golfing talent, coach Tim Mickelson did not lose hope. For every Spanish word out of his mouth, Jon Rahm had to do fitness exercises as a punishment. His English improved rapidly with the help of this somewhat militant measure. Together with the German professional Max Rottluff, Jon Rahm formed the best golf duo in the history of this university at Arizona State University. The two won eleven tournaments, only Phil Mickelson was more successful in American college golf history with 16 tournament victories, and Jon Rahm, with 60 weeks at the top of the World Amateur Golf Rankings, holds the undisputed record in this category to this day. His trainer Tim Mickelson predicted at this time: “Before he turns 30, Jon Rahm will be a Ryder Cupper”.

In his third year of college the time had finally come: Jon Rahm was invited to a PGA tour tournament for the first time. The Phoenix Open took place in Arizona, his new home. He slipped on his university’s ASU football jersey, his back was adorned with the number 42 in dark red numerals with a gold frame, and his nickname “Rahmbo” could be read above it. Borne by the ecstatic cheers of the audience, Jon Rahm played his way through the four rounds of the tournament in a frenzy and finished the tournament in fifth place, the best result of an amateur on the PGA Tour for over seven years. Rahm animated the audience again and again and was very emotional after missed opportunities. Even then, his temperament was evident, for which the audience came to love him in the following years. 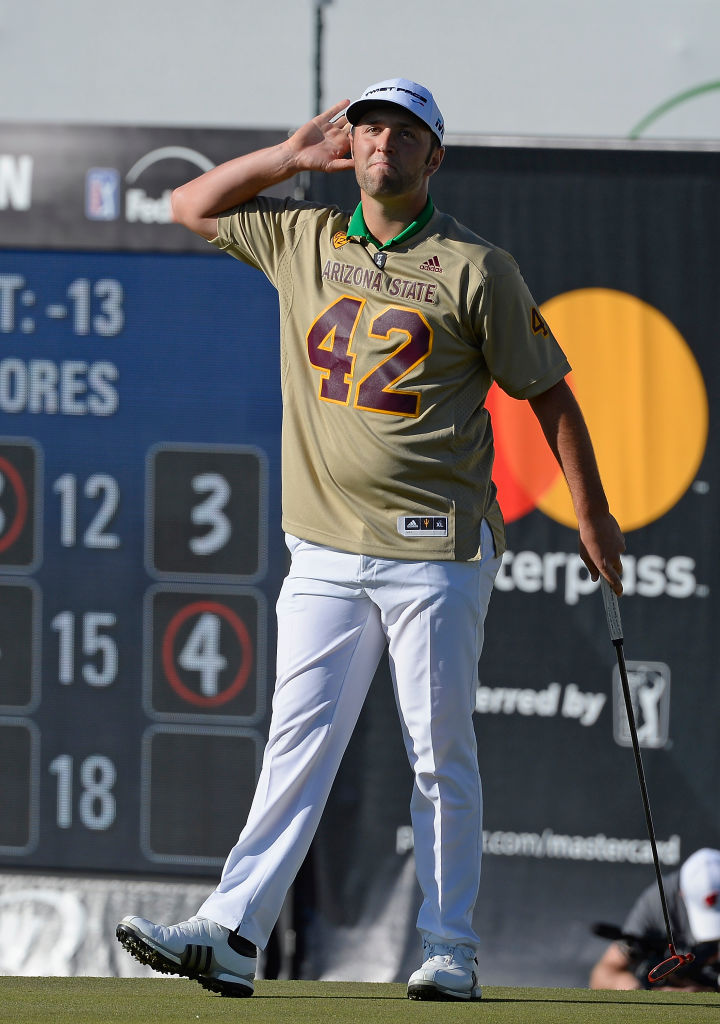 “Rahmbo” in the ASU football jersey at the Phoenix Open. (Photo: Getty)

Jon Rahm: Ryder Cupper at the age of 22

A year later he celebrated an excellent 23rd place at his major debut, the US Open 2016, and after this tournament finally switched to the professional camp. Unbelievable things followed. At Quicken Loans National, his very first tournament as a professional, Jon Rahm led the field after two rounds and finished the tournament in third place. He qualified for the British Open, which took place a few weeks later, but which he played without much success. But only a week after the major, he entered the RBC Canadian Open and played furiously into second place. Less than a month after he switched to the professional camp, Jon Rahm was already in the top 3 in two PGA Tour tournaments and already had the tour ticket for the coming season in his pocket. By the way, coach and manager of the Basque still: Tim Mickelson. The former ASU golf coach left his job to focus on Jon Rahm.

The success story continued. With a 20-meter eagle putt on hole 18 – in Miguel Angél Jiménez fashion – it took its first PGA Tour title at the Farmers Insurance Open in January 2017. Another tournament victory followed on the PGA Tour and three more on the European Tour, including the Open de Espana, until Tim Mickelson’s prophecy came true in September 2018: Jon Rahm became Ryder Cupper. As a debutant, he helped his team to victory in Paris at the age of just 22 and defeated none other than the great Tiger Woods on the final Sunday of this legendary team event.

The second Spanish number 1 in the game’s history

In 2019 Jon Rahm shone on the European Tour. He impressively won the DP World Tour Championship in Dubai and thus the “Race to Dubai”, the season’s ranking of the European Tour. He was also voted “European Tour Golfer of the Year”. Jon Rahm had reached the throne of golfing Europe after less than three years as a professional, but things went even higher for the former boy from a small Basque fishing village. After further triumphs, Jon Rahm celebrated victory at the Memorial Tournament on July 19th, making history: He became number one in the world rankings. Second Spanish golfer of all time after Seve Ballesteros, his childhood idol. “I don’t know what to say. This has been my goal since I was 13 years old. Seve is a very special player for all of us and to be second after him is a real honor,” said Jon Rahm, completely distraught after the Memorial Tournament.

See Also:  Quite a start for an 18-year-old defender

Jon Rahm only held this placement for two weeks until Justin Thomas replaced him. But the 26-year-old’s career is still young. So far he has been missing major titles, although he already finished in the top 5 at the US Masters, the US Open and the PGA Championship. And a participation in the Olympics or even an Olympic medal is still missing in his already bulging trophy cabinet. If he manages to continue his meteoric rise and win the missing titles in the decades to come, the world may one day be talking about Jon Rahm as the best Spanish golfer of all time.