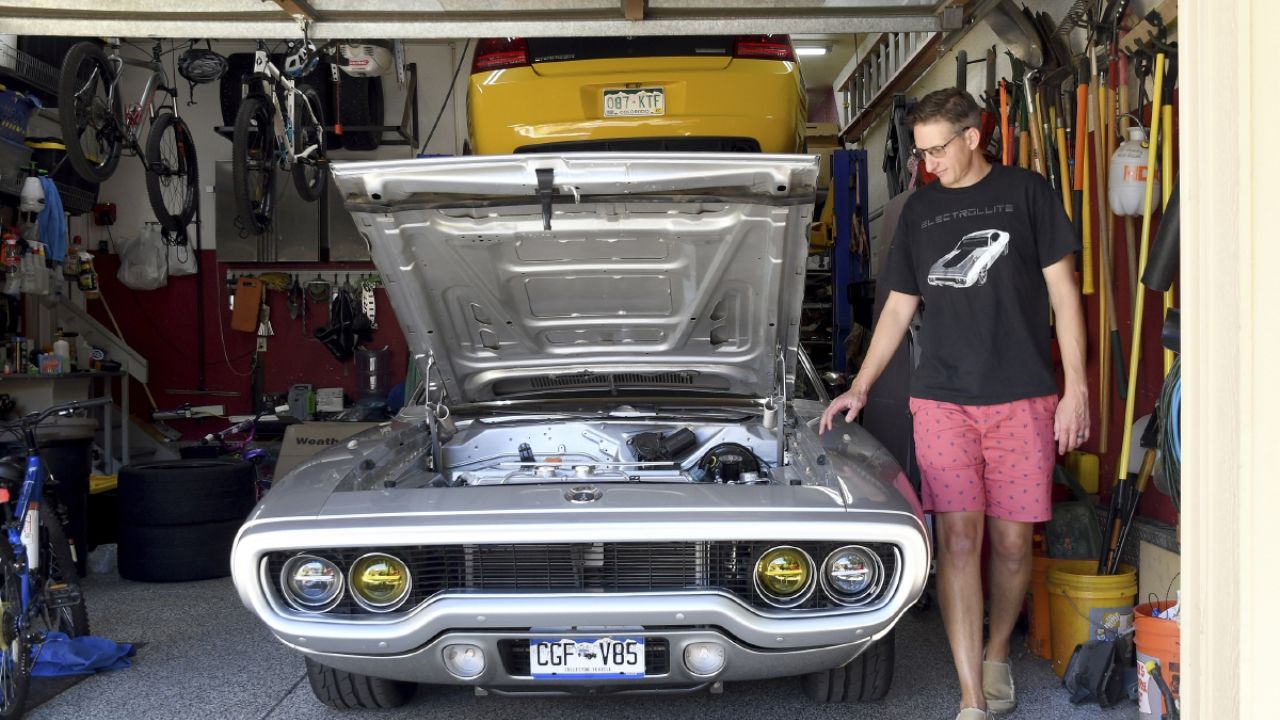 DENVER (AP) — When Kevin Erickson cranks the engine in his 1972 Plymouth Satellite sports sedan, there’s a low hum instead of the usual sounds of pistons moving the crankshaft, gasoline rushing through the carburetor and the thud of the exhaust. .

Erickson is part of a small but growing group of hobbyists, racers, engineers and entrepreneurs across the United States who are converting vintage trucks and cars into faster, greener electric vehicles.

Despite derision from those who attack converted cars as looking more like remote-controlled or golf carts, modifications to electric powertrains are becoming more commonplace as battery technology advances and the world searches for more energy. cleaner to combat climate change.

“Remote-controlled cars are fast, so to say that is really a compliment,” says Erickson, whose renamed “Electrollite” accelerates from zero to 60 mph in three seconds and tops out at about 155 mph.

There are also more curious glances towards the public electric charging stations, which are increasingly common in the country.

Erickson — a truck driver who lives in suburban Denver — bought the car in late 2019 for $6,500. He subsequently embarked on a year-and-a-half job to convert the car into a 636-horsepower electric sedan using battery packs, a motor, and the entire rear subframe from a Tesla Model S.

“This was my way of taking the car I like and then modern technology and performance and mixing it all up,” explains Erickson, who invested $60,000 in the project.

Jonathan Klinger, vice president of automotive culture at Hagerty, an insurance company and automotive lifestyle brand that specializes in collectible vehicles, says converting classic cars to electric is a trend.

In May, the Michigan-based company conducted a web survey of some 25,000 car enthusiasts in the United States, Canada and the United Kingdom. About 1% had partially or fully converted their classic model to run with some form of electrified drivetrain.

The main reasons were to improve acceleration and performance, embrace a project that sounded fun and challenging, and address environmental and emissions concerns. 25% said they approve of classic vehicles being partially or fully converted to electric cars.

“Electric vehicles provide a lot of performance just by the nature of the mechanics of their operation,” Klinger says. So it should come as no surprise that a percentage of people who convert their classic cars to electric are interested in improving performance. He compares the current trend to the hot-rod movement of the 1950s.

“There’s something satisfying about having an old car with a carburetor,” he admits, because the car looks like it did when it was new. Some enthusiasts want to preserve the rumble of the original gasoline engines.

Other hurdles include the knowledge required to tackle such a complicated project, as well as safety concerns about handling high-voltage components, parts availability, and time to demonstrate a positive environmental impact.

Because classic vehicles are driven less than 1,500 miles a year on average, it takes longer to offset the carbon footprint of battery manufacturing, Klinger says.

Sean Moudry, co-owner of Inspire EV, a small conversion company in suburban Denver, recently modified a 1965 Ford Mustang that was destined for scrap. His project lasted a year and a half and cost $100,000.

Moudry and his partners tried to put enough power into the car that it would burn its tires when starting on a race track. They replaced the underpowered six-cylinder gasoline engine with the engine from a wrecked Tesla Model S. They also installed 16 Tesla battery packs with a total weight of approximately 360 kilos.

A lot of weight

Most classic vehicles, including the Mustang, were not designed to handle the weight and high performance of a powerful electric motor. So the team had to beef up the car’s suspension, steering, driveshaft and brakes.

The result is a “Frankenstein”-like vehicle that includes the rear axle from a Ford F-150 pickup and rotors from a Dodge Durango SUV, as well as stronger disc brakes and coil-over shocks.

Although Ford and General Motors plan to produce stand-alone electric motors that are marketed to classic vehicle owners, Moudry says it’s still unrealistic that an average mechanic would have the resources to take on such a complicated project. “It will take time for conversions to electric vehicles to become widespread.”

But that reality could come sooner than expected, according to Mike Spagnola, president and CEO of the Specialty Equipment Market Association (SEMA), an association dedicated to vehicle replacement parts.

At SEMA’s annual show in Las Vegas in 2022, 1,951 square meters of space were dedicated to electric vehicles and their parts. That was an increase of just 2,500 square feet compared to 2021.

“Early adopters would take a crashed Tesla and remove the motor, harnesses and batteries to find a way to fit them into whatever vehicle they wanted to build,” he says.

“Today there are many manufacturers starting to produce the components… We are very excited about that.”