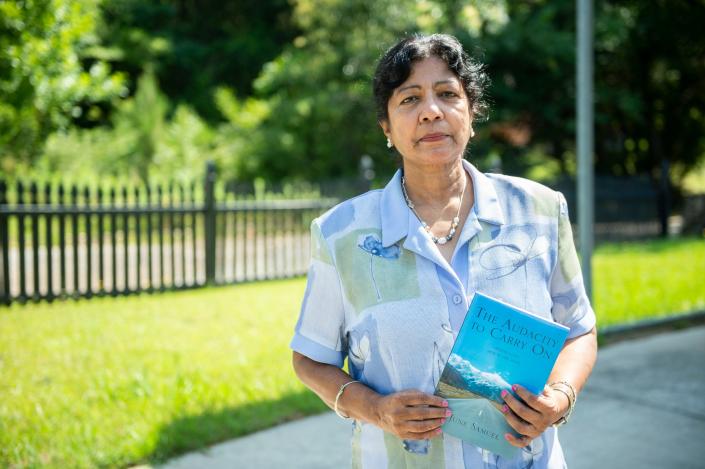 Her parents moved to Alabama when she was 8, leaving her in India to be raised by her grandfather. They maintained a relationship across the seas, but traveling or communicating was not easy in the 60s.

By the time Samuel went to medical school and got married, she had gathered enough resources to keep up with her parents, who were living and working in Tuskegee at the time. There she faced the culture shock and fear that comes with being the only Indian family in a small rural town.

She became a mother herself as she got to know her own, but several years later her parents decided to retire to India.

Now a retired doctor, Samuel still lives in Tuskegee with her husband. They are also still the only Indian family in town.

Through each of these chapters in her life, however, she says she learned a lesson: how to carry on.

With that in mind, she decided to write a collection of short stories about her life in India, her relationships with those who raised her, the faith that drove her forward, and her found love for the Rural Alabama. Covenant Books published Samuel’s book, “The Audacity to Carry On,” earlier this year, and it’s available now. for sale on Amazon and other online bookstores.

“I’m so thrilled that they agreed to have the book published,” Samuel said, “It was one of my life’s wishes to write about my grandfather, in particular.”

Samuel’s grandfather passed on his values ​​of education, community and Christian faith, and she said her connection to him was crucial to getting to where she is today.

In one of his short stories, Samuel reflects on the advice his grandfather often gave him:

“Everything is relative,” he said, “We humans are tiny creatures living on a planet called Earth, looking out into the vast universe. Although it was difficult to experience disappointments, it was not literally the end of the world.

His grandfather was a captain in the British allied forces during World War II. He was a scholar in English and their native language, Tamil. He was a gardener in his spare time and he was like a superhero to her.

It wasn’t until Samuel built his life in rural Alabama that she began to recognize that her grandfather had such a complex identity — and so did she.

“I am Indian. I’m American. I am Tamil. We have so many different identities and people try to put us in one box,” Samuel said. “If you go to India, every part of India has its own culture.”

This is something that people tend to confuse.

Samuel mostly only has positive things to say about his adopted country, but one criticism is how outsiders can lump it into an “other” category.

In a short story, she recalls an experience she had while volunteering at a suicide prevention hotline. A man called her and talked to her for a while before starting on her “weird accent”, saying it annoyed her.

Samuel remembers thinking something like, “If he notices my accent, maybe he’s paying attention to what I’m saying, and maybe I understand it.”

Later, she met this same man in person, and he called her a “strange Mexican woman”. Samuel simply corrected him.

She has other Indian friends who live in Auburn and Montgomery, but they don’t share the same native languages ​​or dialects. When they spend time together, they speak English.

“We actually feel at home here because you form your own little identity and you know you’re not like everyone else,” Samuel said. “It’s always funny how people confuse you.”

Hadley Hitson covers the rural South for the Montgomery Advertiser and Report for America. She can be contacted at hhitson@gannett.com.

Editor’s Note: The Montgomery Advertiser has partnered with Report for America to bring our readers coverage of rural communities through the black belt. We are able to fund this work through reader subscriptions and generous donations from those who support this unique partnership. For more information, contact Paige Windsor at pwindsor@gannett.com.