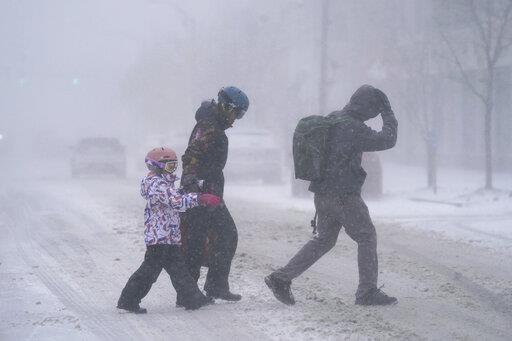 Millions of Americans endured frigid temperaturesblizzard conditions, power outages and holiday gatherings canceled Friday due to a winter storm almost unprecedented that it is exposing 60% of the population to some type of bad weather alert.

More than 200 million people were under advisory Friday, the National Weather Service reported. The winter cold map “represents one of the longest warnings in history,” forecasters said.

More than 3,400 flights within, to or from the United States were canceled on Friday, according to the FlightAware tracking site. Some airports, including Seattle-Tacoma International, closed runways.

More than 458,000 homes and businesses were without power as of Friday morning.

The huge storm spread from border to border. In Canada, WestJet canceled all flights Friday at Toronto Pearson International Airport, starting at 9 a.m. And in Mexico, migrants waited near the US border in unusually cold temperatures for the Supreme Court’s decision on the validity of Title 42, a measure that prevents many from seeking asylum.

“This is not like a snow day when you were a kid,” President Joe Biden warned Thursday after a briefing with federal officials. “This is something serious.”

The meteorologists said that a cyclone bomb — which occurs when air pressure drops very rapidly during a severe storm — developed near the Great Lakes, causing blizzard conditions, including high winds and snow.

Activists also scrambled to get the homeless out of the cold. In Chicago, Andy Robledo would spend the day organizing efforts for homeless people who received tents, propane heaters and other supplies through his nonprofit, Feeding People Through Plants.

The weather service is forecasting the coldest Christmas in more than two decades in Philadelphia, where classes were held online Friday or canceled altogether.

Most of western and parts of northern Michigan were under blizzard warnings. The zoo and an art museum in Detroit closed.

Byron Brown, mayor of Buffalo, New York, urged people to stay home as forecasters warned that 2 to 4 feet (0.6 to 1.2 meters) of snow could fall over the weekend.

In New England, heavy rains and wind gusts of more than 60 miles (96 kilometers per hour) knocked out power to an estimated 150,000 homes and businesses in Massachusetts, Rhode Island, Maine, New Hampshire and Vermont. There were another 100,000 blackouts in Connecticut.