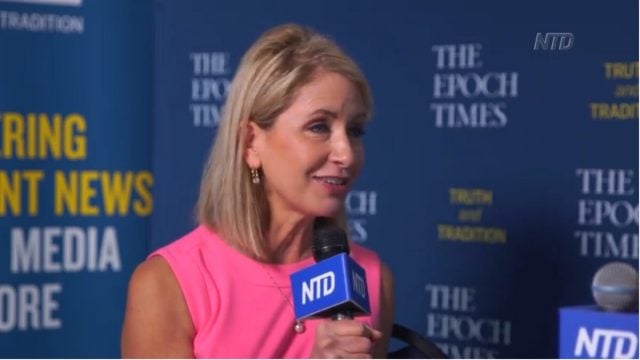 Republican MP Mary Miller spoke about her January 6th experience in the US Capitol on the Epoch Times show American Thought Leaders.

“It was shocking,” she said. “We were in the house and were told that the Capitol was under attack. Then we heard gunshots, ”said Miller.

Local police officers have moved the MPs from the Capitol Hall to rooms without windows. “They told us, ‘Don’t tell the media where you are.’ We weren’t there very long. “

Miller described January 6th as “a very sad day for our nation.”

In an interview, she was disappointed with her democratic colleagues: “Last night in the Capitol… the Democrats accused us of treason, of riot, of insurrection, we caused it. It really doesn’t help and it’s a lie. It is untrue. And I think we should stop this kind of talk and work together for the good of our nation. “

“I, of course, with my colleagues condemned this violence … I want to be part of bringing healing to our nation,” Miller continued.

It is unclear who instigated the storm on the building. The FBI asked the public for help in identifying those involved.

“I support our police force, the Capitol Police, I am sure that each of them did everything they could and I am sorry that all of this happened,” she said.

Miller cautioned against jumping to conclusions about who is behind the run on the US Capitol, saying the nation is “more divided than ever.”

“One side says it’s Trump, the other side says it’s Antifa. Personally, I will withhold a statement on this. I am sure it will be investigated. I wouldn’t be surprised if it were both, “she said in the interview.

“I think our nation is more divided than ever, and I hate it. I hate the angry rhetoric. I think leaders should try to bring our nation together, ”she added.

The process in the chambers to determine whether the objection to the Arizona electoral vote should be upheld was interrupted that afternoon when a group of protesters stormed the US Capitol at around 2:15 p.m. a At 6 p.m. the official news came that the building was secured.

Congress confirmed the election of former Vice President Joe Biden in the early hours of the morning on Thursday.

Miller is the newly elected Congressman for the 15th District of Illinois. She voted in favor of opposing the Arizona and Pennsylvania election results. Both objections failed the required majority in both chambers.

(With material from The Epoch Times USA/Ups)

All the peoples of the world know the devil from their stories and legends, traditions and religions. Even in modern times – hidden or open – he wages his fight against humanity in every imaginable area: religion, family, politics, economy, finance, military, education, art, culture, media, entertainment, social affairs and international relations.

It spoils the youth and forms a new, more easily influenced generation. It promotes mass movements, uprisings and revolutions, destabilizes countries and leads them into crises. Like a gnawing disease, it attaches itself to the state organs and society and wastes their resources on its own ends.

In their desperation, people then reach for the first “savior” who appears in the cloak of certain ideologies, such as communism and socialism, liberalism and feminism, right up to the globalization movement. Limitless happiness and freedom for everyone are promised. The bait is all too tempting. But the path leads into darkness and the trap has already been set. Here more about the book.

Order now – The three-volume book is available immediately at the special price of 50.50 euros in the Epoch Times Online Shop

The three-volume book “How the devil rules the world” examines historical trends and the development of centuries from a new perspective on a total of 1008 pages. It analyzes how the devil occupied and manipulated our world in various masks and with sophisticated means.