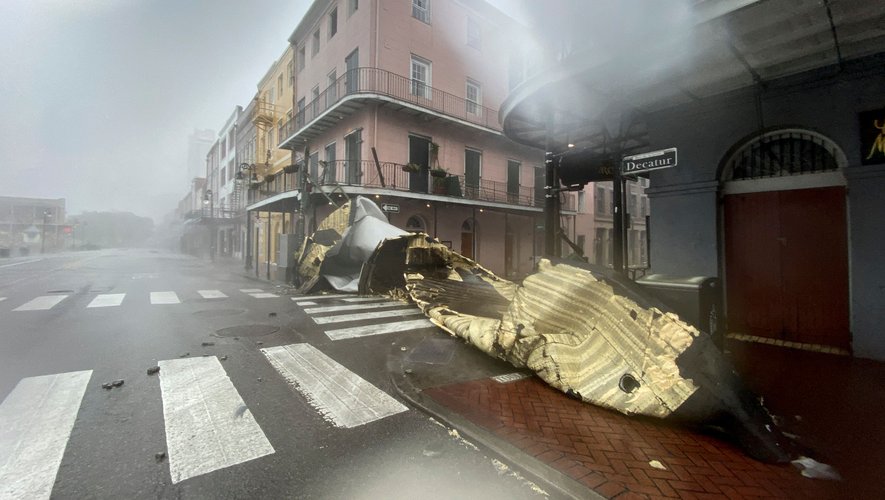 the essential
Hurricane Ida continued its menacing course in Louisiana on Sunday evening, sixteen years after the devastation of Katrina, of which it has the power. At the start of the evening, it went into category 3.

Classified in category 4 on its arrival on the coast of Louisiana, hurricane Ida passed in category 3 at the beginning of the evening, the same category as Katrina which had devastated this state in the south of the United States in 2005. “Ida is a a dangerous Category 3 hurricane on the Saffir-Simpson scale (out of 5). Rapid weakening is expected over the next day, but Ida is expected to remain a hurricane until late tonight,” the National Hurricane Center said. (NHC) in its latest newsletter.

The NHC warned of the “deadly risk” created by the hurricane and urged residents of affected areas to “take all necessary steps to protect their lives and property.” At 7 p.m. local, Ida was still making headway with winds of 195 km/h, slightly less violent than when it made landfall shortly before noon (1700 GMT) at Port Fourchon, some 160 km south of New Orleans. .

“It’s a potentially deadly cyclone,” said President Joe Biden, who visited the headquarters of the US Crisis Management Agency (FEMA) on Sunday and urged people to take the threat seriously. In New Orleans, gusts of wind rushed through deserted streets, all shops, gas stations and houses were barricaded, the French quarter having ended up emptying, noted AFP on the spot.

“Once the hurricane has passed, you should prepare to stay sheltered where you are for at least 72 hours,” state Governor John Bel Edwards told a conference. hurry. On CNN the governor estimated that the expensive system of dikes put in place after the devastation of Katrina in 2005 should “hold”.

More than 700,000 homes could be without electricity in the evening, according to the specialized site poweroutage.us. The ocean level was more than a meter and a half above its usual average high in several places, according to the NHC. In a neighborhood in the east of the city, a few hours before Ida’s arrival, residents were finishing their preparations. Charles Fields thus stored his garden furniture inside his house. “I’m not sure I’m ready but we’ll have to face it,” he said.

“We’ll see how it holds up,” said this resident who found himself with more than three meters of water in his living room when Katrina hit. Eighty miles away, in the capital Baton Rouge, a curfew has been announced for the entire section of the city west of the Mississippi River, from dusk until dawn , Monday.

Ida “will be one of the strongest hurricanes to hit Louisiana since at least the 1850s,” John Bel Edwards warned Saturday. “Do not go out”, therefore hammered all weekend the American meteorological services, which recommend to the inhabitants to take refuge in a room without windows of their residence and to caulking there.

The memory of Katrina, which made landfall on August 29, 2005, exactly 16 years ago, is still painful in Louisiana: more than 1,800 people died and bad weather caused tens of billions of dollars in damage. “I know it’s very painful to think that another big storm like Hurricane Ida could make landfall on this anniversary,” said John Bel Edwards. “But we’re not the same state as 16 years ago, we have a hurricane risk reduction system.”

See Also:  Severe weather returns with possible thunderstorms and hail in the south central US.

The White House announced Sunday that federal agencies have deployed more than 2,000 emergency response specialists, including search teams, as well as supplies of water, food and power generators. Local authorities, the Red Cross and other organizations plan to open “dozens of shelters for at least 16,000 people”, the White House added on Sunday.

As the surface of the oceans warms, hurricanes are becoming more powerful, scientists say. In particular, they pose an increasing risk to coastal communities that are victims of wave-submersion phenomena amplified by the rise in sea level.

And the hurricane hits a region already on the alert for health: the Delta variant has hit Louisiana head-on, poorly vaccinated, bringing its hospital system to its knees, with nearly 2,700 hospitalized patients and as many daily deaths as at the height of the pandemic. The storm therefore comes at “a very difficult time”, underlined the governor, presenting “extreme difficulties for us, with the hospitals so full of Covid patients”.

“Make sure you wear a mask and try to keep your distance,” Joe Biden, who declared a state of emergency in Louisiana, reminded residents forced to go to shelters.