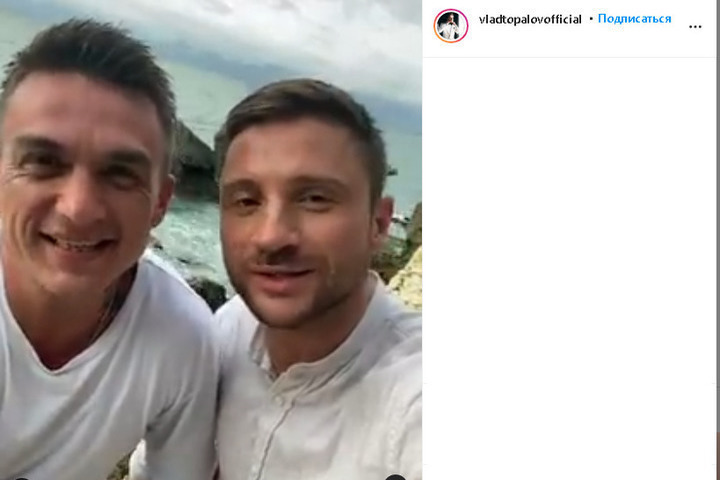 To the 20th anniversary of Smash !! the artists decided to record a new song

Judging by the latest posts, the ex-members of the pop duo Smash !! met 2021 together in Bali. Today Vlad Topalov posted a video on his Instagram, in which cheerful friends, barely holding back their laughter, congratulate subscribers on the New Year and the 20th anniversary of their group. They also promised fans to release a new track in honor of the festive occasion.

“This year Smash !! anniversary, – say the artists, – we need to think of something. Exactly – we will record a song for you! ” It is not known for sure whether they will keep their promise, but in the comments a vote has already spontaneously begun, in which the listeners unanimously supported the idea and are eagerly awaiting the release of the composition. Topalov was so moved that he confessed his love to his colleague: “We are resting with my dear soul for the first time in 25 years. I love you very much, handsome Sergei Lazarev”.

Despite the sentimental publication and hugs in the frame today, the relationship of the musicians in the past was far from cloudless. Group Smash !! It was created in 2001 by businessman Mikhail Topalov, Vlad’s father. He was 15 at that time, and Lazarev was 17 years old, and they sang together in Fidgets. It began when Vlad’s mother invited them to record a composition from the musical “Notre-Dame de Paris” as a birthday present for Mikhail Topalov. He was so impressed that he decided to promote the story. The first video for the song “Should Have Loved You More” was filmed in 2002 in Thailand. In the same year, the group took first place at the “New Wave” in Jurmala. In 2002 the first album “Freeway” was released, which gained fame not only in Russia and the CIS, but also in the countries of Southeast Asia. It went platinum and was subsequently reissued twice. In 2003-2004, the team applied for participation in Eurovision and, it seemed, was about to go there, which all the media suddenly began to write about, but the information turned out to be false.

See Also:  Russia will continue to seek the total lifting of the blockade against Cuba

In 2004 the second album, “2nite”, was released, which eventually became the last. Immediately after its release, the duo announced their breakup. Evil tongues said that the reason was the scandalous departure of Sergei, who allegedly announced that he would fulfill all obligations to the label, but was not going to work with Vlad anymore. According to the terms of the contract, the team was supposed to release another disc, but Lazarev in the end categorically refused to do this, so Topalov had to record it (“Evolution”) alone. After that, the musicians did not communicate for a long time and even tried not to intersect at national team events, but over time, relations began to improve. The result was a reunion for one joint concert in 2011, dedicated to the group’s 10th anniversary. Also Topalov was a special guest at one of Lazarev’s performances, and together they sang “Prayer” and “Freeway”. In 2018, at the creative evening of Yuri Nikolaev, the pop stars sang “Prayer” already under the name Smash !!

Given the latest news, a joint vacation trip and Vlad’s frank confession, many fans suggest that former colleagues could have an affair.