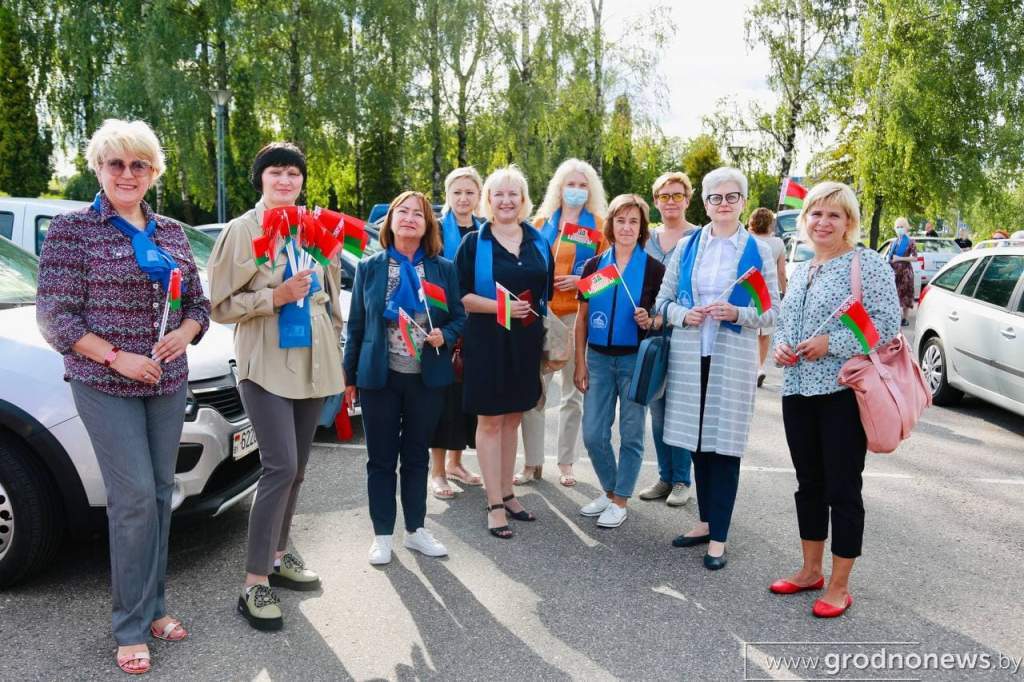 Action “Strength in Unity! For Belarus! ” simultaneously launched in all districts of the Grodno region. In Grodno, at least 70 cars joined it. 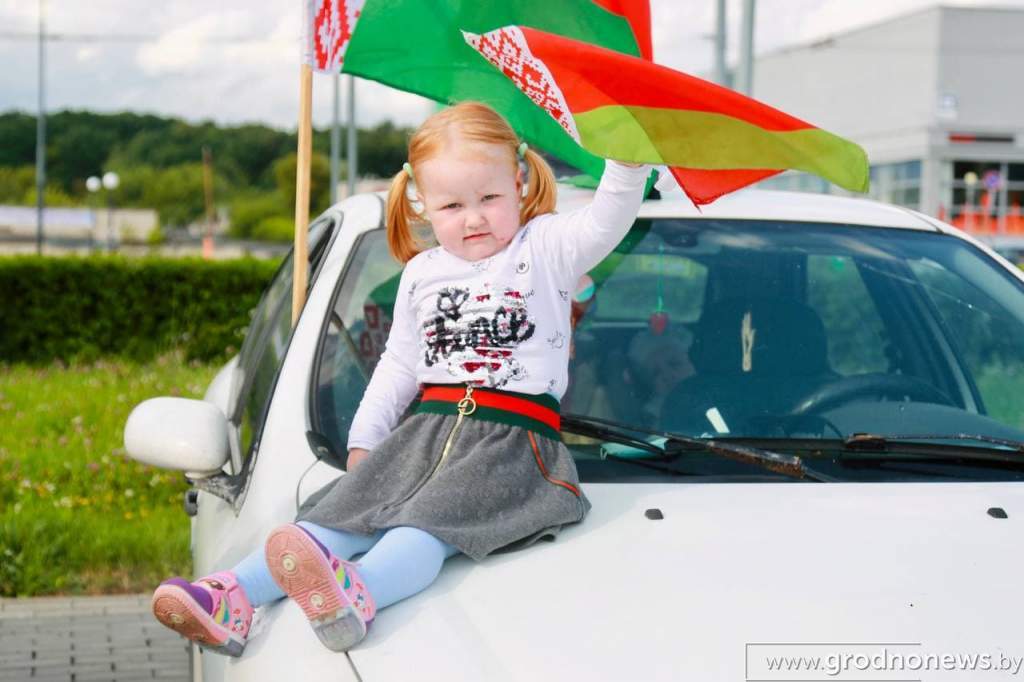 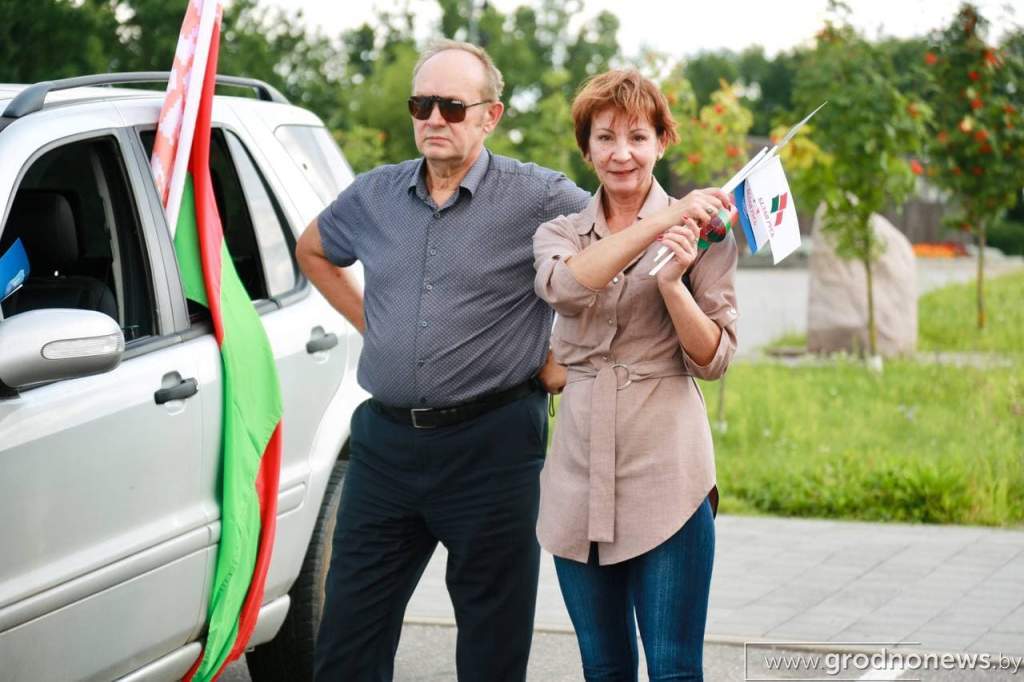 The Mound of Glory was crowded tonight. The familiar surroundings of the landmark place for all Grodno residents were filled with red and green flowers – these are the participants of the patriotic rally gathered under the state flags to express their love for their native country and show the unity of the Belarusian people. 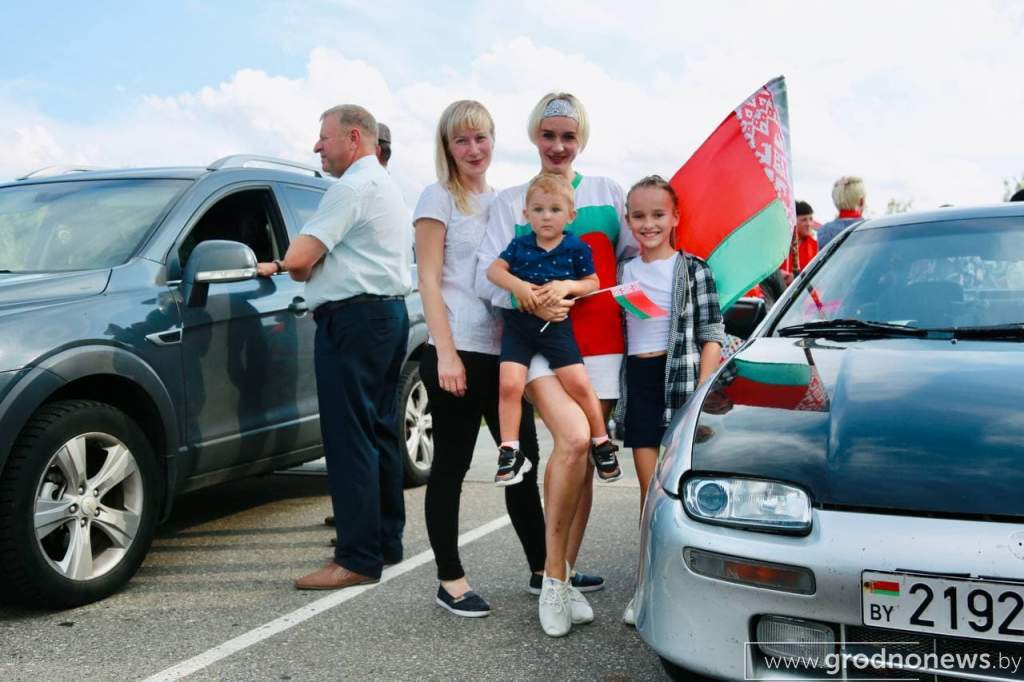 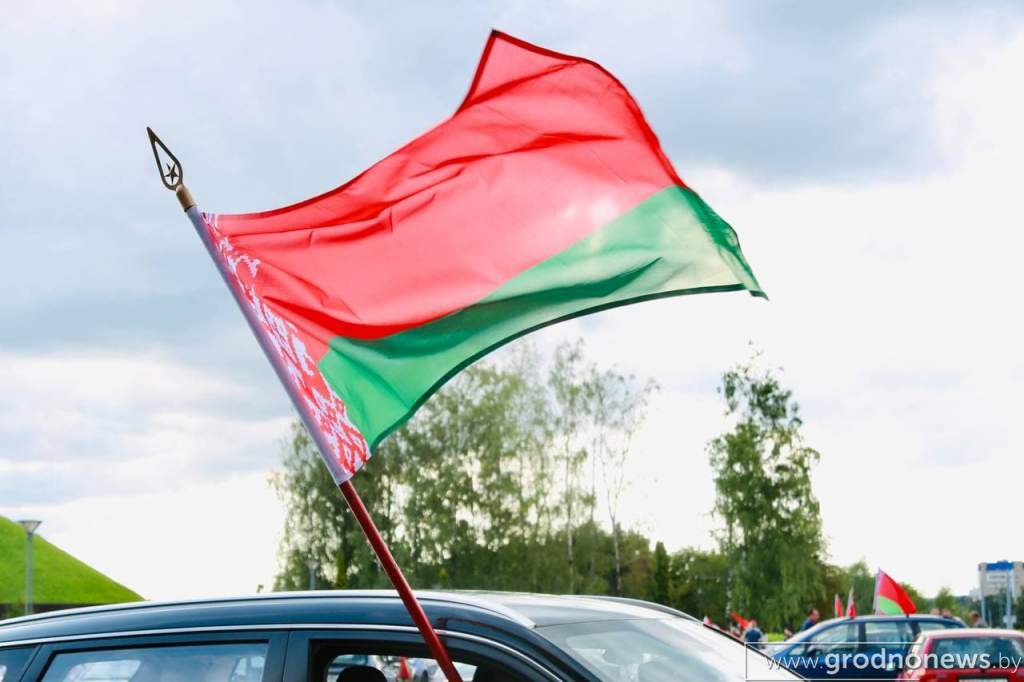 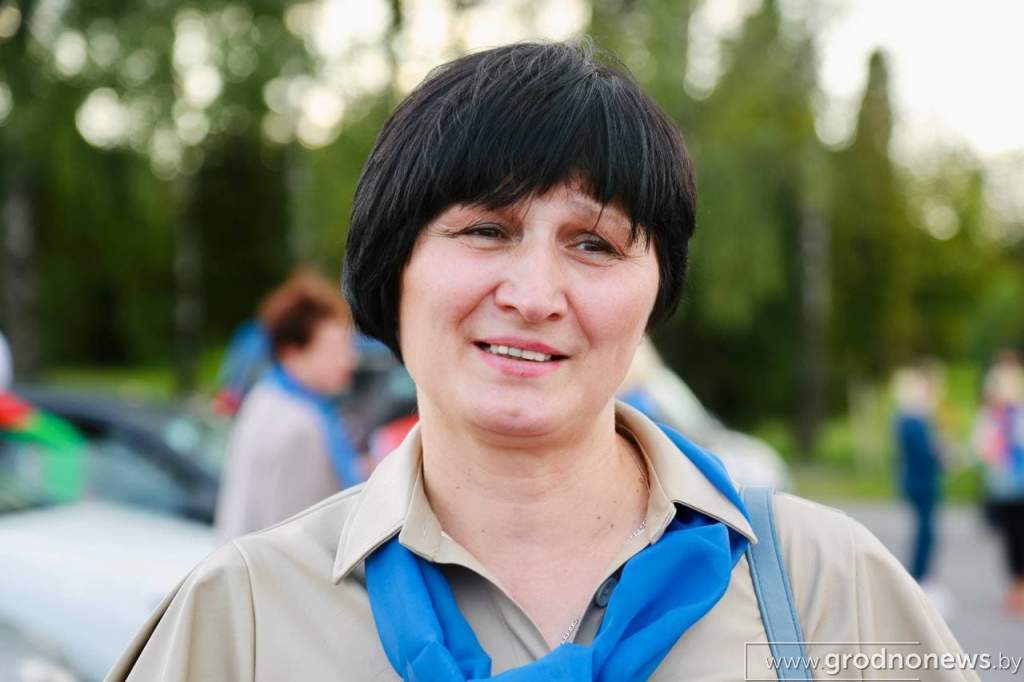 – On this wonderful day we are holding the already traditional patriotic action “Strength in Unity! For Belarus! ” Today, a lot of caring people have gathered in this sacred place for all Grodno residents to express the unity of our Belarusian nation., – said Irina Stepanenko, chairman of the Grodno regional organization of the NGO “BSZh”. – Our national anthem contains wonderful words “We, Belarusians, are world people”. Our organization stands under the motto “For peace not only on Earth, but in every home and family.” Therefore, today we have united and stood in a common impulse for patriotism, peace and solidarity. 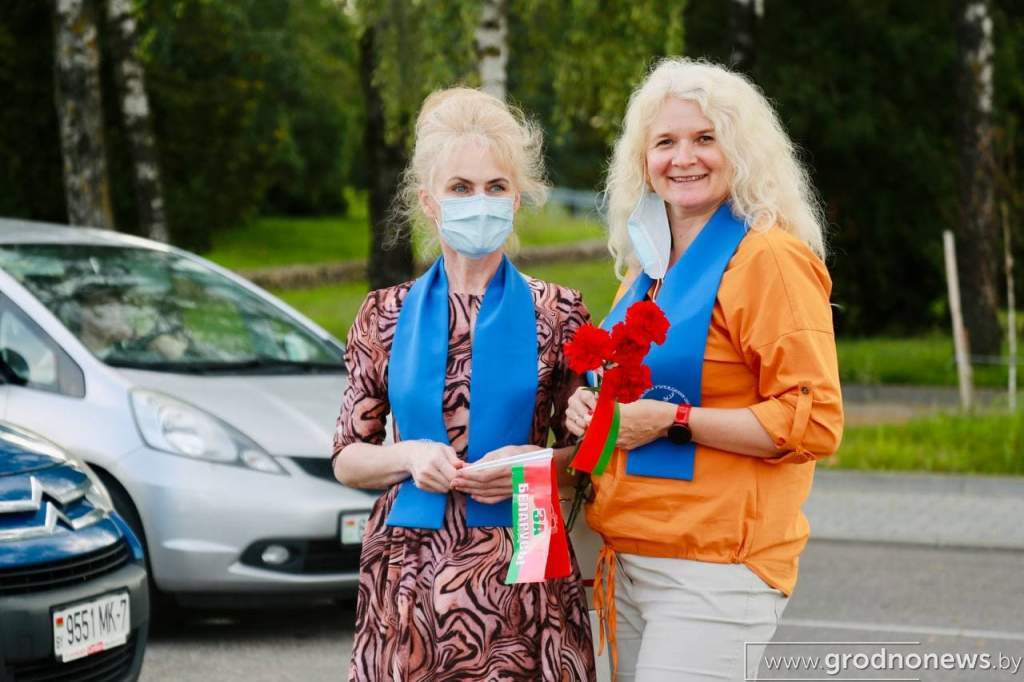 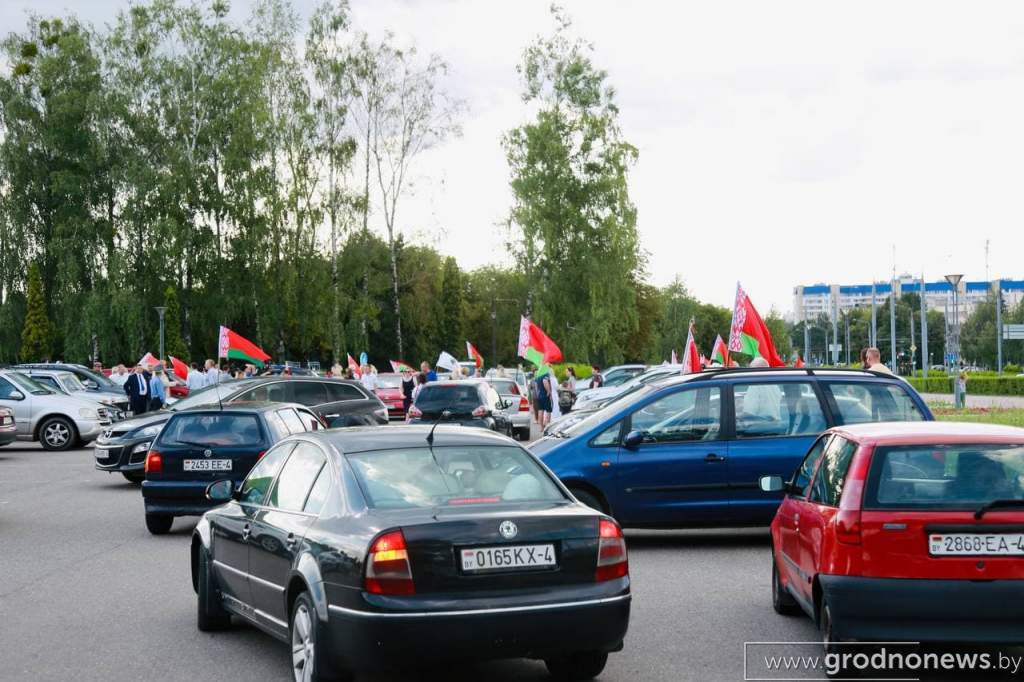 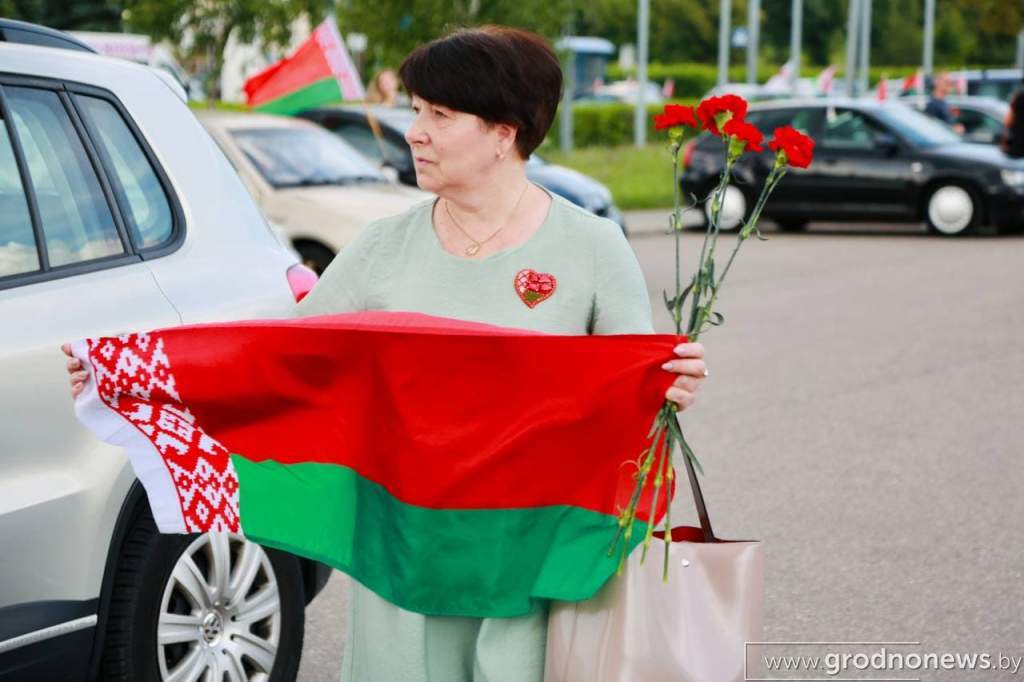 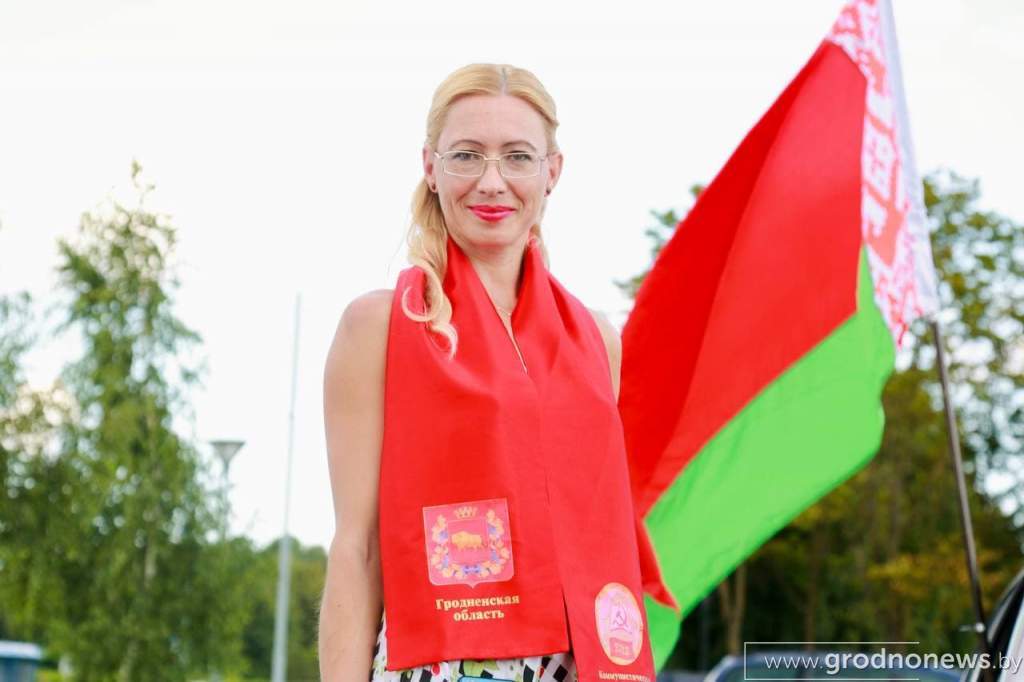 Before the start of the action, the participants laid flowers at the memorial complex to honor the memory of those who defended the freedom and future of our country. Those who have joined the initiative are confident that together the Belarusians will be able to preserve the legacy of their heroic ancestors and build a prosperous country that their descendants will be proud of. 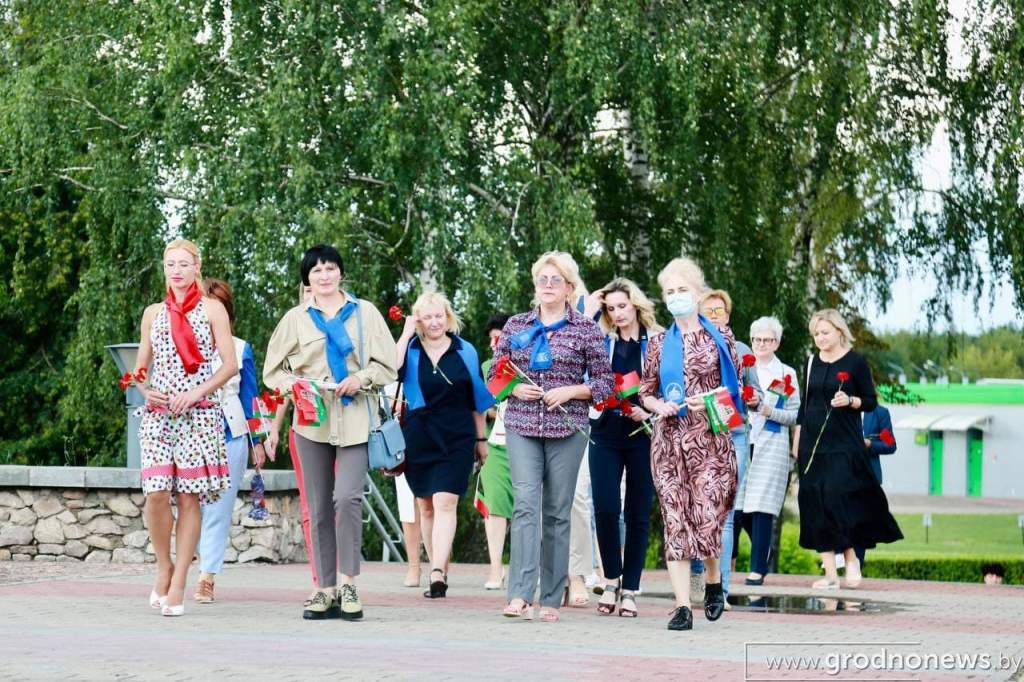 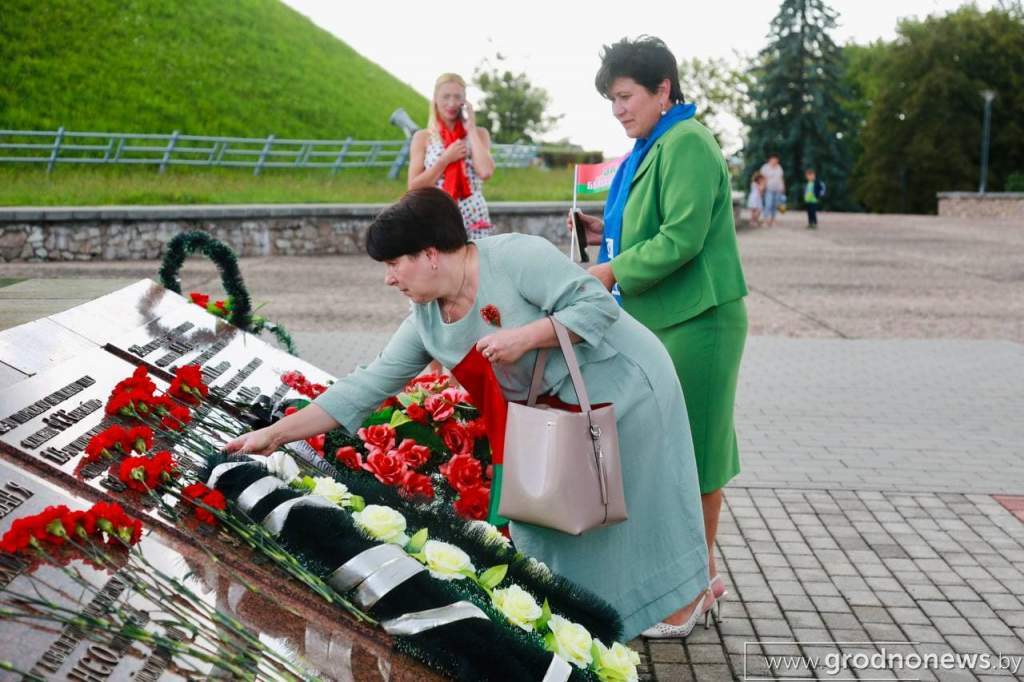 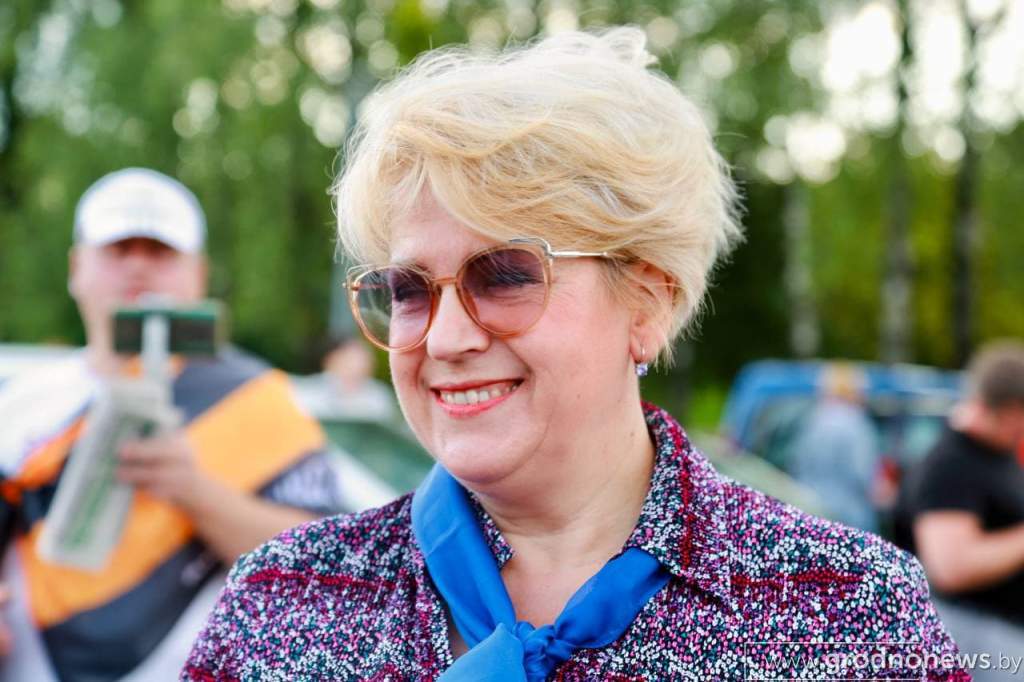 – The public association “Belarusian Union of Women” is taking part in this wonderful patriotic action. Who if not women should actively advocate for well-being, unity and peace in the family, in the country and on the whole Earth? We came with the best feelings, pride and joy for our homeland, – shared Larisa Kuchuk, chairman of the Lenin district organization of the NGO “BSZh”. 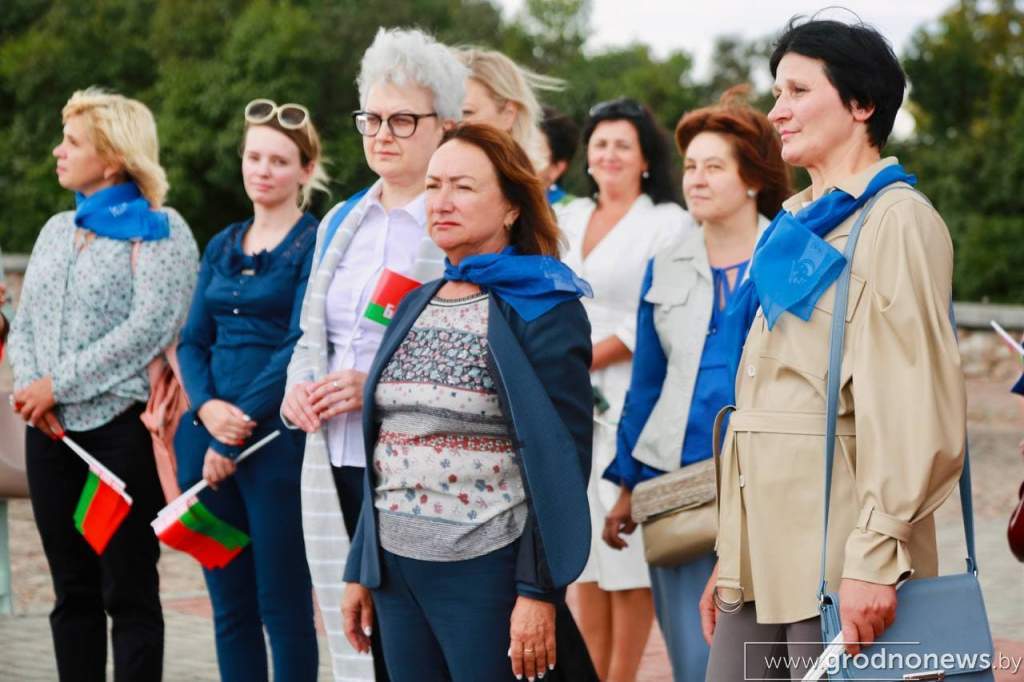 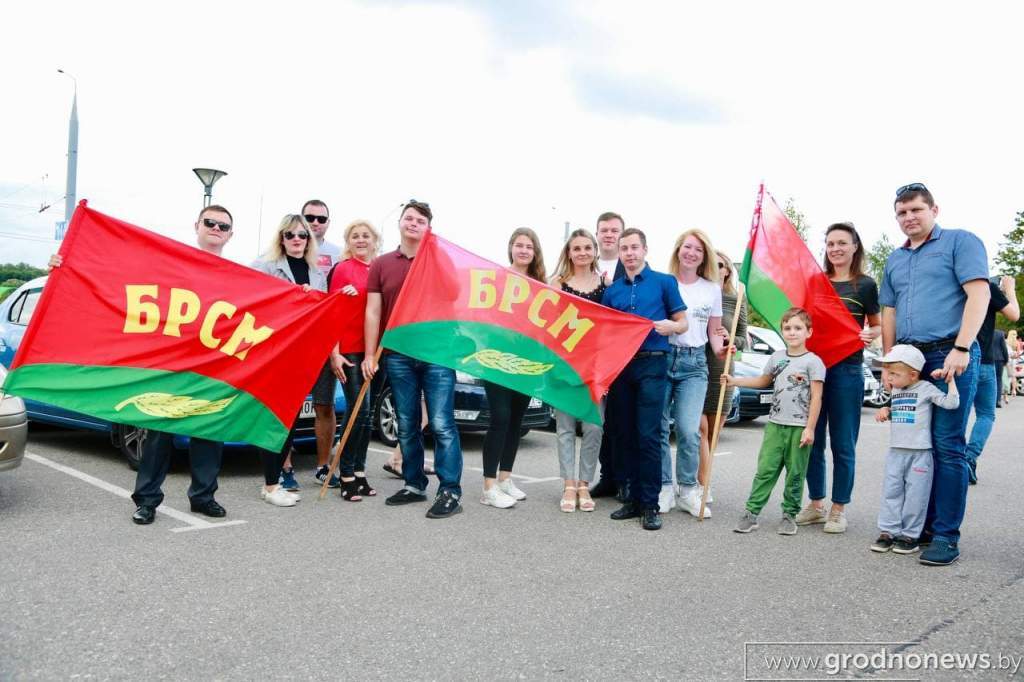 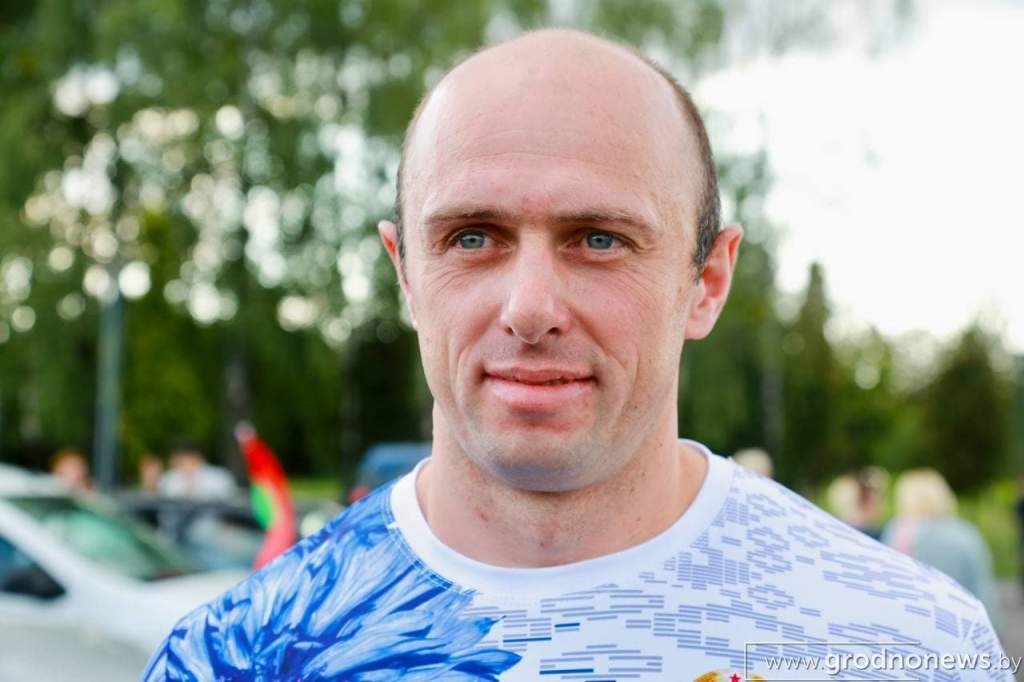 – My children were brought up under these symbols, I grew up myself, my formation as an athlete took place., – said Evgeny Nazarevich. – For more than fourteen years he has performed at international sports forums. When I was awarded, the flag of the Republic of Belarus was raised, and I felt incredible pride for my country and for the opportunity to glorify my homeland far beyond its borders.

Joined the action and coordinator of the NOD of Belarus Vadim Goncharuk:

– August 9 is the anniversary of the election by the people of the President of the Republic of Belarus. And today a “Big Conversation with the President” took place, at which very important questions were asked to Alyaksandr Lukashenka, including the eighth article of the Constitution, to which the NOD has been drawing people’s attention for many years. Only together will we be able to defend ourselves against external threats and preserve real sovereignty. 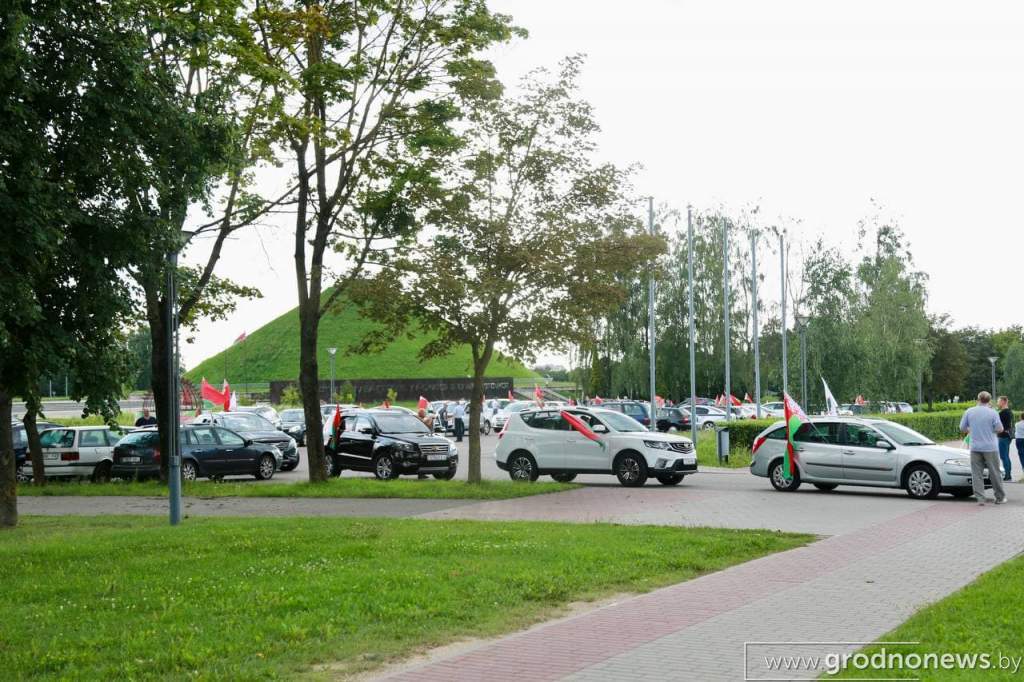 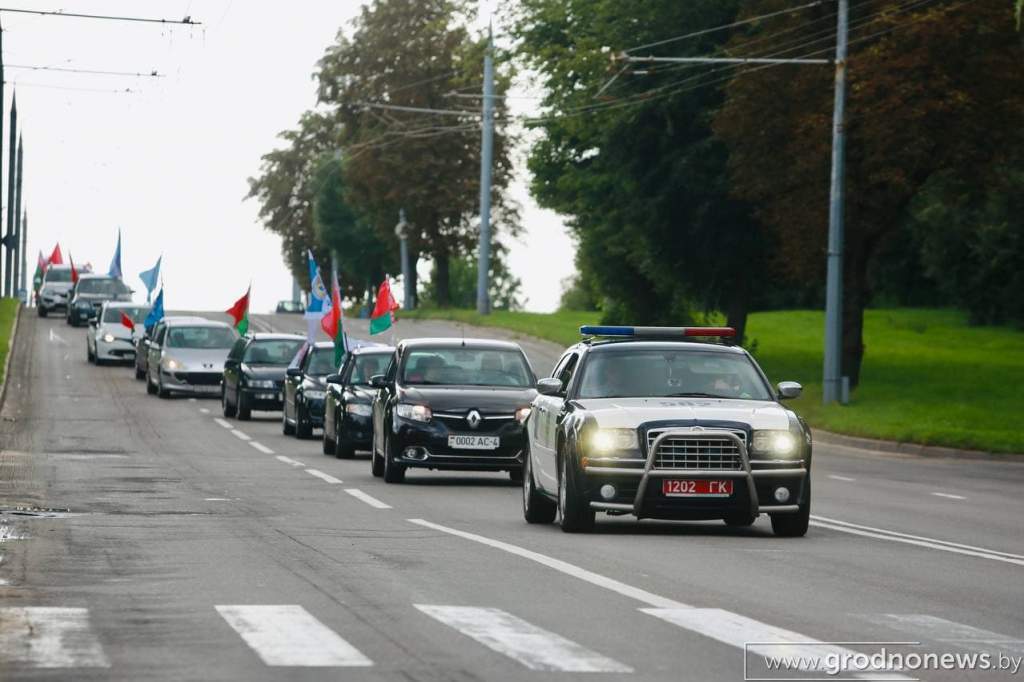 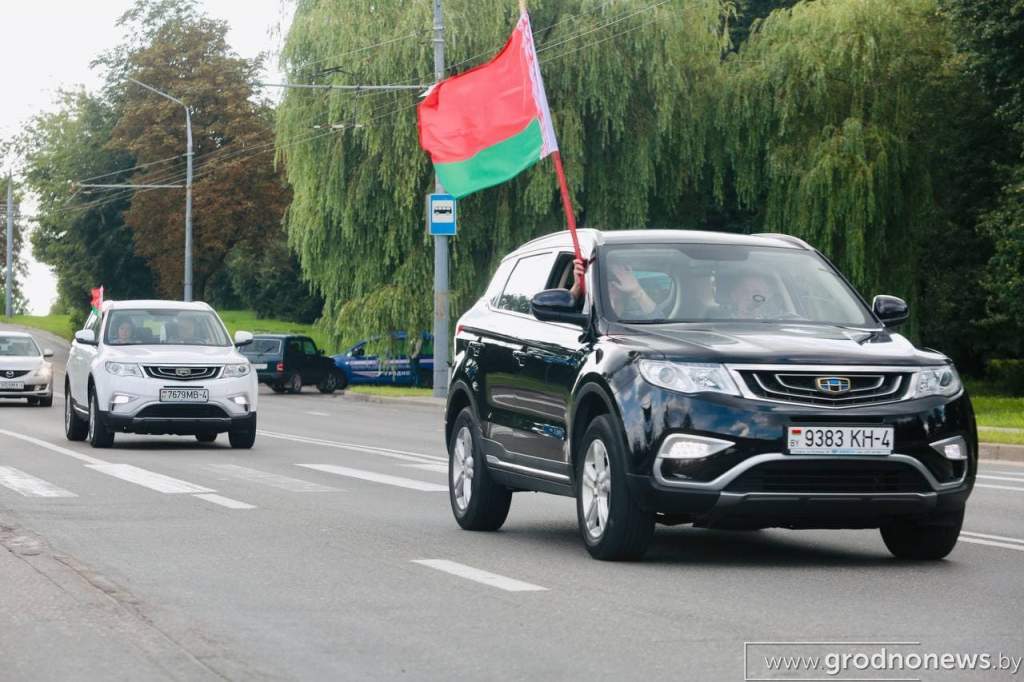 At exactly 18:00 dozens of cars decorated with state symbols lined up in a large column. Amicably, the participants set off along the route that ran through Kosmonavtov Avenue, Belusha Street, Vostochny Most, Yanka Kupala Avenue, Pobedy and Gornovyh streets. After that, the column drove through the streets of Mostovaya, Paris Commune, Dzerzhinsky, Brickel and through Magistralnaya street. The rally ended at the starting point – at the Mound of Glory. 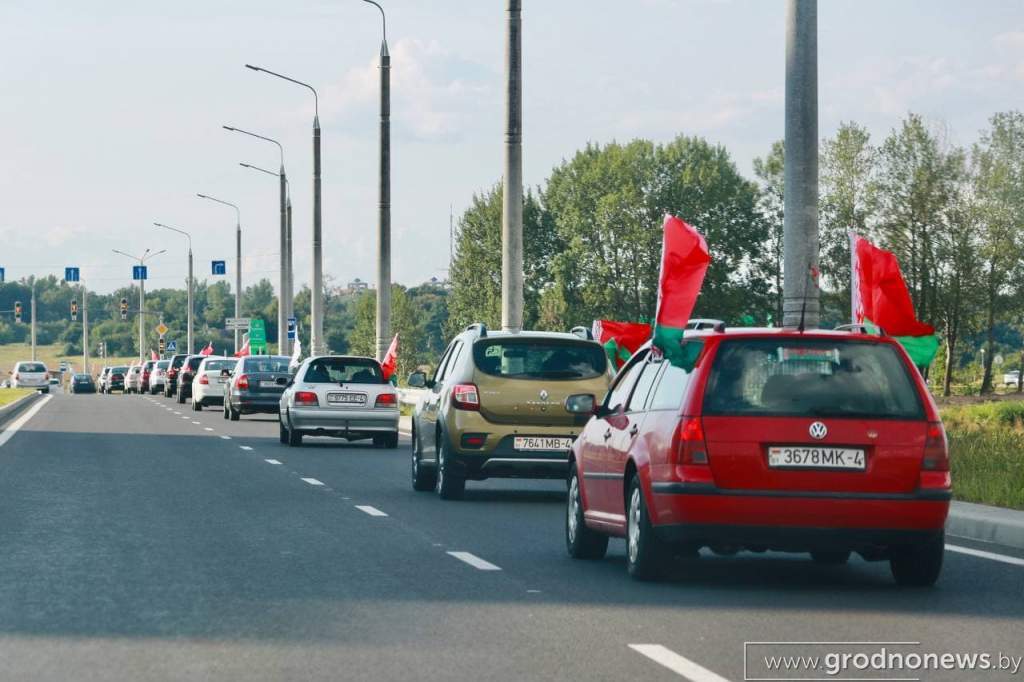 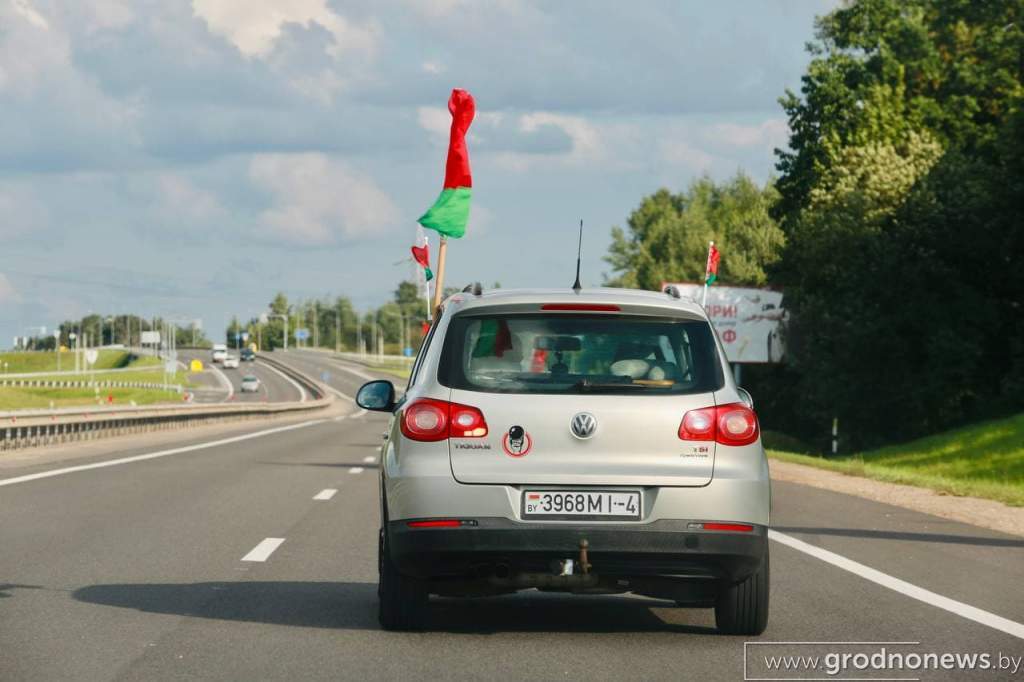 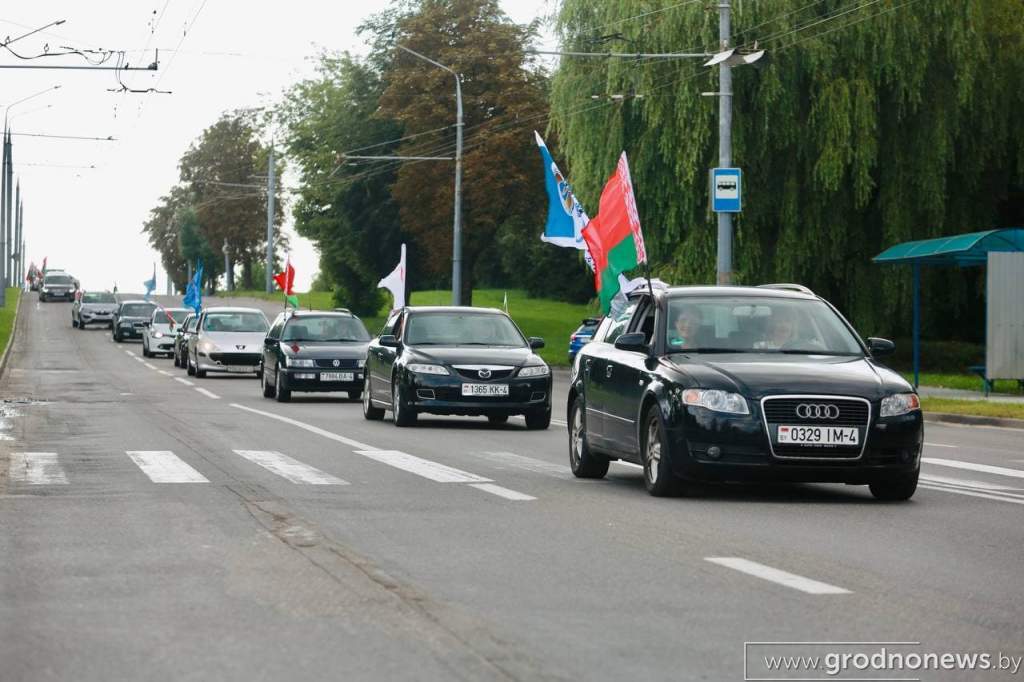 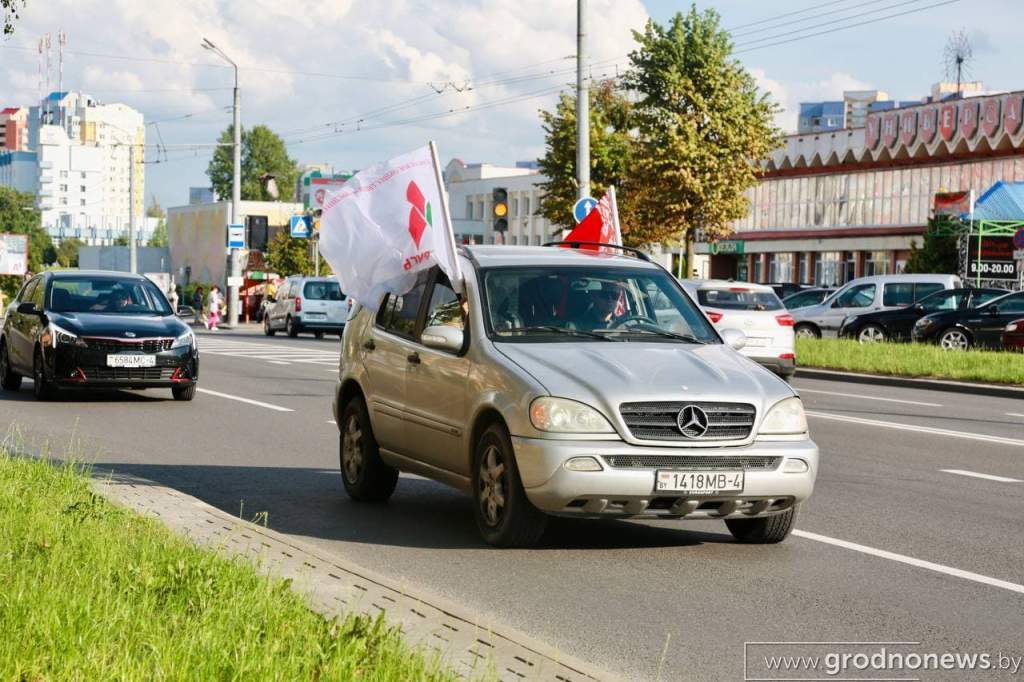 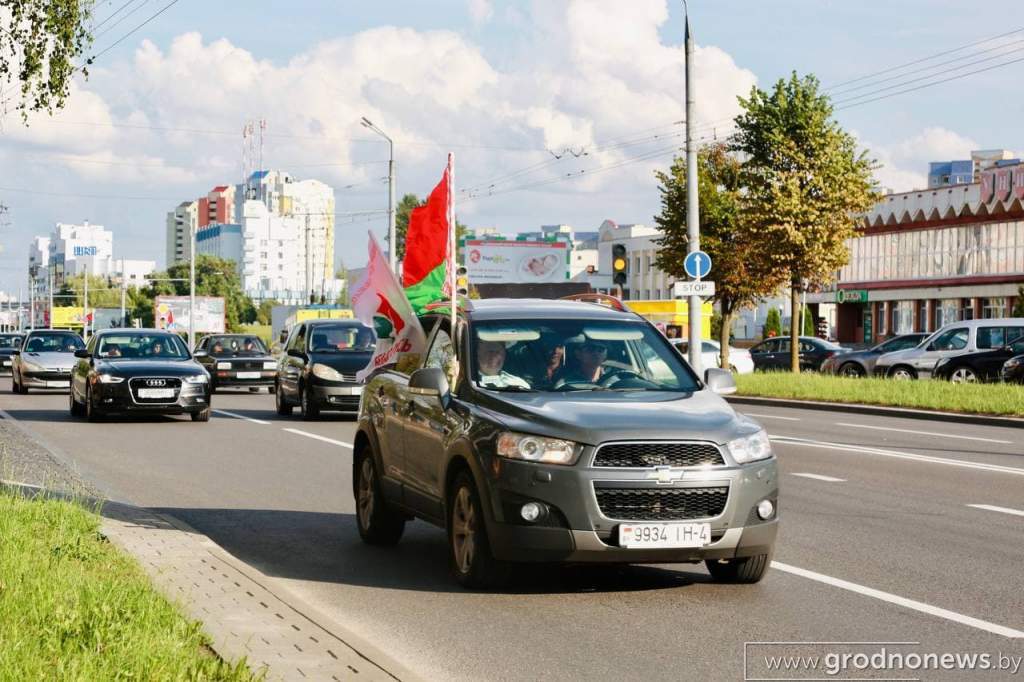 See Also:  "Japan is a bad country that has deceived and defeated the United States." The Japanese media has stopped thinking even after 80 years. The war program had the same content this year ... | PRESIDENT Online
Operational and topical news of Grodno and the region in our Telegram channel… Follow the link!