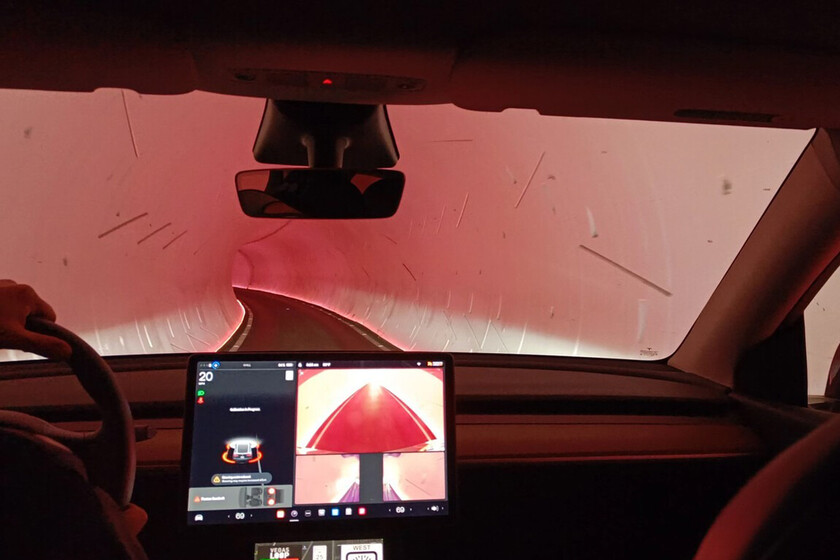 Las Vegas gathers tens of thousands of people every year during the CES days, and obviously, users must have fast and efficient transportation to move by the convention center and the different hotels that house companies. Among all the available options, there is one in particular that we really wanted to try: Loop.

Loop is nothing more than the eccentric project of The Boring Company, founded by Elon Musk, and whose objective is to relieve traffic congestion in the city through tunnels through which Tesla vehicles pass. In this way, passengers can get into the car and enjoy a continuous journey (and boring) under the city through narrow tunnels illuminated with RGB LEDs and a whole 5G infrastructure to allow the vehicle to be always connected.

It was one of the big attractions during the opening day of the CES 2023. And it is that multiple media gathered to be able to test this project first hand. We were able to take one of the Teslas to move around the Las Vegas convention center, and in this article we wanted to reflect our first impressions.

Comfortable, but inefficient for a large influx of people

The original idea of ​​Loop was that the passenger could get into a fully autonomous Tesla and that it would take him to any of the underground stations in the city. However, in the current state of the project this is not the case, so we had to ride with a driver to go through the tunnels, which since last time have extended a total of 4.7 kilometers.

As if it were a subway station, we went down the escalator and entered one of its stations for the first time. Our intention was to take a Tesla from the south to the west station, so the staff took charge of taking us to the vehicle and beginning our tour.

The tunnels are only a little over twelve feet in diameter, enough for a Tesla Model Y or Model X to navigate the journey without difficulty. One of the peculiarities of the tunnels, in addition to their narrowness, is that they are always illuminated by RGB LEDs that cover the entire distance. In addition, at the top of the tunnel we find an extensive 5G infrastructure that allows the car to always be connected so that its software can work without problems.

The day before I was able to do the same route on foot, taking approximately 30 minutes. However, with this system, the journey from the south station of the convention to the west only lasted 1 minute.

The journey was really comfortable and quiet, an advantage of traveling in an independent vehicle and not on a subway. But obviously this has its downsides. And it is that if we speak in terms of efficiency in the system, it must be taken into account that these are vehicles in which only a maximum of 5 people can travel. For this reason, depending on the number of vehicles that travel through the tunnel, this could lead to queuesexactly what is tried to avoid with this project.

This detail is not a deliberate mention, but was precisely what happened last year in another of the project’s tests in Las Vegas, where several of these cars they crowded into the tunnel to meet the high demand.

Another issue that worries is the speed of the vehicle, directly related to the previous point. And it is that a car through a narrow tunnel gives for what it gives. It is not a problem if the system is conceived to transport travelers from one point of a massive event to another, but when it comes to connecting an entire city, it raises questions. During the test we went to no more than 50 km/hfar from the figure of 240 km / h that Musk promised.

The experience itself was wonderful. In fact, the driver took the opportunity to tell me everything related to this project. In addition, in a display of confidence, he was also able to tell me that if the project ends up going ahead and the tunnels end up extending more and more, it would be a great job opportunity for him, so I could only wish him all the luck with work.

As we have mentioned, the intention is that in the future driving will be completely autonomous, without depending on drivers for our journey. Although Tesla vehicles are already capable of this, in the Loop this option has been ruled out for safety reasons. In addition, Las Vegas is not the only point where these tunnels are being built, as this project is also being developed in Chicago, Los Angeles and Maryland.

For the convention, all the trips were free, so even more motivation to try them and draw our conclusions. However, for journeys outside the event, day passes can be purchased by priced at $4.50. This allows the user to take as many trips as he wants during a day. During this CES, there were a total of 80 vehicles carrying travelers at all times.

We were able to take one of these vehicles practically without waiting, although we got up as early as possible for it. In a CES that comes after a critical pandemic situation, it remains to be seen how this system ends up performing.