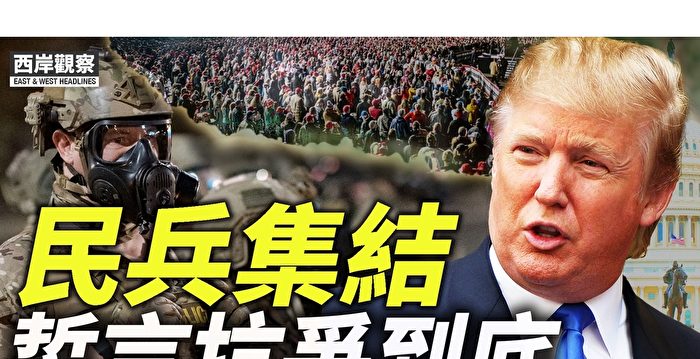 [Epoch Times January 06, 2021]Hello everyone! Welcome to West Bund Observation, I’m Lin Xiaoran. Today is January 5th, Wednesday, the Georgia state congressional senator election officially debuted, and the controversial Dominion voting system failed again; President Trump confirmed that tomorrow will be a speech at the anti-theft anthology held in DC; whether it can overturn the swing The State Electoral College voted, and Vice President Pence will play a key role. Senator Josh Hawley was the first to prevent Biden from being certified. His family was threatened by the ultra-left organization Antifa last night; vowing to fight to the end, the All-American Militia Alliance declared that it would prevent the left from stealing the election at all costs result.

The Dominion voting system failed in the Qiaozhou runoff

Today, the Georgia state congressional senator’s runoff has officially appeared. When the controversy over the presidential election did not come to fruition, this swing state’s special election concerning the seats in the Senate attracted special attention. In particular, this election still uses the Dominion voting system and received a large number of mailed votes. President Trump is always paying attention to election trends. He tweeted at noon: “Georgia’s 12th district has reported that the Dominion voting machine has been out of work for more than an hour in certain Republican-majority regions. Ballots are locked. In the ballot box, I hope they can be counted.”

The news that Trump received came from Rick Allen, a member of the 12th congressional district in Joe State. According to a Twitter friend, he himself went to the Republican-controlled Newton County (Newton County) to vote early this morning. When he put the printed ballot into the Dominion machine, he was informed by the polling station staff that the machine’s scanning function A malfunction requires repair. Some netizens also broke the news that the staff told voters to leave their votes. After the machine was repaired, they would scan the votes for them.

In the face of doubt, the office of Joe State Secretary of State Raffensperger (Brad Raffensperger) issued a statement stating that, despite receiving the malfunction report, they did not stop voting and resolved the issue before 10 am. But the statement cannot dispel doubts about the fairness of the Dominion machine and the election.

For Republican voters, more people tend to vote at the polling station on election day, while Democrats prefer to mail ballots or vote in advance. In this runoff, Joe State voted early and broke the record, which caused great pressure on Republicans. Therefore, he paid special attention to the voting on election day and the ballot counting process later.

As I mentioned in the previous program, the Democratic Party used the “Ballot Harvesting” method to collect votes in California to increase the turnout of Democratic voters. Yesterday evening, James O’Keefe, the founder of the online investigative media Project Veritas, released a shocking video showing a central outreach and advocacy center in Atlanta, Joe State. ) Community organization that assisted thousands of homeless people to register as voters. Because they have no permanent residence, the agency provided these thousands of people with the same residential address. And this is a violation of Joe State election regulations. It is still unclear whether this organization mailed ballots for these thousands of homeless people before today’s runoff.

According to the rule of counting votes in the presidential election, it is expected that the two Republican candidates, David Perdue and Kelly Loeffler, will take the lead after the balloting tonight, but as the mail and absentee ballots are counted, the Democratic candidates Jon Ossoff and Raphael Warnock will slowly catch up.

It is worth noting that the current Senator Loeffler will be the last day of her term on January 6. When she was on stage with Trump last night, she made it clear that she would challenge the results of the Electoral College in Congress tomorrow. However, if the two parties are in a stalemate and the results of the Joe State election are not released, Loeffler will be disqualified as a member of Congress after midnight tomorrow, and can no longer participate in voting and voting, and the Republican Party will lose a key vote.

Today, Tingchuan people from all states have arrived in Washington DC. Online video shows that almost all Trump supporters are on the same flight. At the same time, a large number of people have taken the lead in gatherings in Freedom Plaza and in front of the Supreme Court. Despite the rain and low temperature, the enthusiasm of Chuanfen was still not blocked.

White House Social Media Director Dan Scavino released a video in the afternoon. He said that he could hear the shouts of the rally in the West Room of the White House, thanking everyone for their patriotic enthusiasm.

President Trump also confirmed that he will attend the rally and give a speech tomorrow. He said: “I will speak at the’Save America’ rally on the Oval Lawn at 11 am Eastern Time tomorrow.” He called on supporters to come in early.

Trump also hopes that Vice President Pence will play a key role in Congress tomorrow. He said: “The vice president has the right to reject fraudulent electoral votes.” Prior to this, the much-watched Pence issued a statement by the chief of staff, expressing his welcome to the Republicans in the Senate and House of Representatives to challenge the electoral votes. With Loeffler’s words, there are currently 13 Senate and more than 100 members of the House of Representatives who have expressed their views that they will launch a challenge.

Pence Chief of Staff Marc Short said in a statement: “Vice President Pence shares millions of Americans in worrying about name fraud and irregularities in this election… The vice president welcomes the senators’ efforts to use The law gave them the power to object on January 6, and show evidence to Congress and the American people.”

There is still much controversy about the role that Pence will play in the electoral vote verification process. Democrats and some Republicans believe that Pence can only perform a ceremonial role, but Trump and some constitutional scholars pointed out that, as the Speaker of the Senate, Pence has the power to reject the controversial Electoral College vote.

In order to limit Pence, the Senate Majority Leader Mitch McConnell, who publicly supported Biden’s inauguration as President, has already proposed a special motion on January 3 to guide how to vote for electoral votes in a joint congressional meeting between the two houses. There are rules and procedures for counting votes.

The motion stipulates that the joint meeting of the two houses will be held at 1 o’clock in the afternoon Eastern time on January 6, and the meeting will be chaired by the President of the Senate, Vice President Mike Pence. The Speaker of the Senate must appoint two tellers from the Senate, and the Speaker of the House of Representatives, the re-elected Pelosi (Nancy Pelosi), must also appoint two tellers from the House of Representatives.

Pence will start with “A” in alphabetical order, that is, starting from Alabama, open the certificates and documents of the electoral votes of each state, show them to the members of both houses, and then the tellers will count the votes according to the method prescribed by law And determine the final result. The final vote count is given to the Speaker of the Senate, Pence, who will read the vote and announce the next president-elect and vice president-elect of the United States.

The move by McConnell and Speaker of the House of Representatives Pelosi was to restrain Pence. Pelosi claimed that this meeting would not be used as a forum to defend President Trump.

The first to challenge the elector Holly’s family was intimidated

Republican Senator Holley of Missouri was the first Republican in the Senate to announce that he questioned the results of the election certification. He tweeted last night that his family had been intimidated by violent Antifa members. He said that he had returned to Missouri yesterday, and Antiphas came to his residence in DC, threatened his wife and newborn daughter with screams, and tried to smash the door of the residence.

Holly said: “Let me be clear: my family and I will not be intimidated by left-wing violence.”

Antifa not only threatened Senator Tingchuan, but was also very likely to attack the people who went to DC to participate in the rally. Trump tweeted today to remind Antifa not to act rashly. He said: “Antifa is a terrorist organization, please stay away from Washington. Law enforcement agencies are paying close attention to you!” While tweeting, Trump also specifically reminded the national defense. Ministry of Justice, Ministry of Justice and FBI and other government departments.

American Minuteman League: Prevent Bi from coming to power at all costs

In view of fraud in the 2020 election, eight militia groups have recently jointly launched a new “Patriot Action for America” ​​(the Patriot Action for America, PAFA) and published a 2021 action plan on their website, claiming that if the country fails If Biden’s cabinet is prevented from coming to power before January 16, they will begin a nationwide, phased operation on the 16th. The goal is to not allow Biden to hold an inauguration ceremony on January 20.

The eight militia organizations include: “Civil Defense Forces”, “Rabbit Ranch”, “Guardians of Oaths”, “Patriotic Prayer”, “Light Footed Militia”, “American Emergency”, “Pride Boys,” and “Percent The third person”. They said in the statement: “The United States is now under double attacks from domestic corrupt Democrats and foreign communist forces. The country is at a critical juncture. From certain exorbitant taxes, vote bribery, and false freedoms to the The government’s thorough infringement of citizens’ personal lives and countless other unconstitutional and illegal acts against American citizens are all aimed at coveting power and money; for this, they will defend the constitution and protect the foundation of the country, and will stop at all costs Biden becomes president.”

They stated that the Patriots would not fire the first shot, but if any opposition forces fired the first shot on the Patriot action, it would bring a formal declaration of war. Once a civil war breaks out, they will work to achieve three goals, including ensuring the safety of the current President Trump and his cabinet; hunting down and prosecuting all treason Democrats, trial and conviction by military courts, and shutting down all corrupt mainstream media affected by the left. , Radio and other social media and websites, restrict anti-American speech. After completing these three specific goals, they will cease fire.

It is reported that in 2016, the number of militiamen in the United States exceeded 100,000, with members mostly veterans and police. They are loosely managed, but have a unified purpose: to protect the Constitution, defend and adhere to the foundation of the United States.