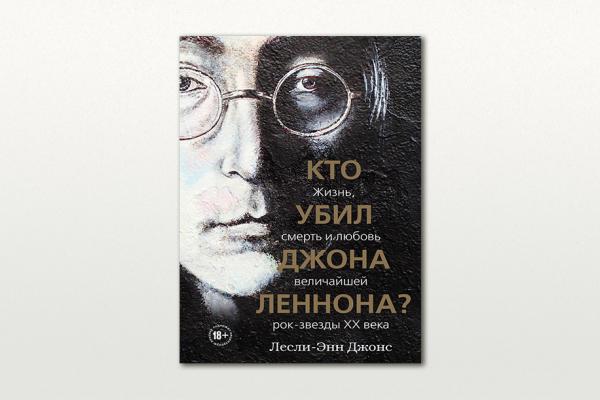 At the very end of 2020, Bombora published a book by Leslie-Anne Jones, Who Killed John Lennon? Life, death and love of the greatest rock star of the XX century. ” Despite its clearly commercial title, this book is not just a retelling of well-known facts, but a new and interesting look at the life story of one of the main rock stars of the 20th century. Let us analyze how it will intrigue even an inveterate Beatleman.

Over the 40 years that have passed since the tragic death of John Lennon, so much has been written, said and shown about him that it is very difficult to add anything new to his biography. The authors of the books either follow in line with the most detailed description of his life, or they decide to look at the history of the great musician from an unexpected angle. The second of these paths was taken by rock journalist Leslie-Ann Jones, known also to the Russian reader as the biographer of Freddie Mercury and Queen.

“It was not my plan to write another standard biography of John. The book was born out of a desire to comprehend his contradictory nature and find out when and why he died. We already know that John had many faces, and I would like to understand who killed the real John. And who killed one or the other of its variations “, – the journalist explains the strange at first glance title of her book. Its alternative name sounds like “In Search of John Lennon”, and, as it seems to us, it conveys the essence somewhat better. The new book about Lennon is not just a piece of history from October 9, 1940 to December 8, 1980, but a kind of psychological portrait of the leader of The Beatles, bright and contradictory, like all geniuses.

Something similar could be found in the book by Albert Goldman “The Life of John Lennon”, published at one time in the Russian series “The Lives of Remarkable People.” The original was met with fierce criticism, but stood out from a series of similar ones: having deprived both John and Yoko of their usual halo, Goldman drew attention to some facts that completely refuse to fit into the blissful “Ballad of John and Yoko” created by the media.

Leslie-Ann Jones follows a similar path in Who Killed John Lennon? Life, death and love of the greatest rock star of the XX century. ” However, where Goldman confronts the reader with a fact (Lennon was a neurotic! An average musician! He hid the secret of Stuart Sutcliffe’s death!), The journalist invites the reader to draw conclusions on their own, considering the facts, including from the angle of modern psychological theories. She begins the story about the Lennons not even with Lennon Sr., but with Lennon’s grandfather, and if the producers had such a desire, the Lennon story could serve as good material for the series. Arrival in Liverpool from starving Ireland, the intricacies of the Lennon family life, the twists and turns of the story of young Fred Lennon, and so on. By the way, after getting acquainted with the history of Fred’s family, his words about what he received “Chic” education become somewhat clearer.

The life of John’s mother, Julia Stanley, is no less interesting. Most biographers bypass the awkward pages of her story, but Leslie-Ann Jones tells it as it is. Say, since the official husband has allowed to have fun while the war is going on, why not follow this advice? Moreover, Julia was not the first and not the last: the biographer dispassionately states the growth of venereal diseases and pregnancies during the war, inviting the reader to decide for himself whether Julia did the right thing or not.

And what about John Lennon? With him, as usual, everything is not so simple either. His much-mentioned arrogance and mood swings, according to Jones’ book, stemmed from self-doubt and attempts to compensate for his weaknesses, and music was a psychotherapy for him long before he met Arthur Yanov and his primary cry therapy. Was John’s childhood happy? Yes and no: if it weren’t for Aunt Mimi, everything would have been much more complicated, but being an orphan with living parents and a strict aunt is also so-so pleasure. Unlike Goldman, Jones tries to understand rather than condemn the protagonist and those around him, and this is undoubtedly the strong point of the book.

The same fully applies to Yoko Ono, who is traditionally accused of many deadly sins, of which the decay of The Beatles is the smallest. Jones is trying to find a middle ground here too. Spiritual twin of John Lennon? Yes. A woman next to whom he felt good, no matter what? Yes. A widow who got married almost immediately after the death of her husband and earned almost more from her star status than the musician himself in his entire life? Yes, and it is also. And at the same time, the author does not just throw accusations, but gives an opinion to people who knew the star couple personally. Among those Jones personally contacted for this book were Cynthia Lennon and BBC host Andy Peebles, who interviewed Lennon for the last time.

See Also:  Do you know what crab sticks really do?

“It’s too easy to judge Yoko. We’re not famous. None of us have ever been married or married to someone who has influenced the hearts and minds of millions. We cannot imagine how such people live and feel, we do not know their problems and concerns. And we will never know. All this makes these few people behave in a way that ordinary mortals consider strange. “.

Duty curtsy to the side “Star widow” – or a proposal to ponder? Perhaps still the second.

Speaking of the book as a whole, one cannot fail to note the strangeness of its composition. Much of it is devoted to the years with The Beatles, while Lennon’s ten years of solo career “Rammed” in five chapters, and events such as the filming of How I Won the War or a concert to help John Sinclair are passed over in silence. This may seem strange to some, but if you look at the book from the point of view “Psychological portrait”, then this is understandable. By 1970, the character of John Lennon was fully formed, and it remains only to follow the facts, many of which, moreover, have long been stated in other books or have nothing to do with the task at hand. Meanwhile, Leslie-Ann Jones has something to say to the reader without it. She dwells in detail on the history of the misadventures of Yoko Ono’s daughter, whose search led the Lennon couple to America, analyzes the reasons for the breakup of the marriage of John and Cynthia Lennon, and in “The Beatles years” offers his version of the relationship between Lennon and The Beatles manager Brian Epstein. In order not to spoil, we only note that the alleged story, apparently, developed quite in the spirit of John Lennon, who called himself the most abnormal of the four.

About a third of the book is occupied by the chronology of John Lennon’s life and notes – this would also seem like hack, if these pages did not in their own way supplement what was said in the main text. And chronological comments like: “John is twenty years old. He already sings so that the words can be made out “ probably would have pleased the hero himself. In addition, the application contains the answer to the most unexpected questions. Apart from the Beatles, how many songs were actually about Patty Boyd? Who did Lennon consider the only heir to The Beatles? What did David Bowie, Danny Boyle, Steve Jobs and rock ‘n’ roll hater Frank Sinatra say about the famous four? What did George Harrison say after the death of John Lennon? The answers can be found in the Appendices and Notes.

Speaking of the Russian translation, I must say about its shortcomings, primarily in terms of editing. So, after some names and quotes, it is not entirely clear why their English-language originals are cited, John’s childhood friend is called either Ivan Vaughan (which is correct), then Yves Vogham, and one of Lennon’s lovers, singer Alma Kogan (a separate chapter is devoted to her), in photo caption is marked as “Alma When”… Moreover, the term «Guitar style» for some reason it is translated into Russian literally, but instead of the concept “Ghost writer” there is a thoughtless tracing paper “Guest writer”… There are few such errors in the book, but they draw attention to themselves.

And yet the merits of Who Killed John Lennon? The life, death and love of the greatest rock star of the XX century “are much brighter than her shortcomings. An attempt to create a psychological portrait of John Lennon is much more interesting than chewing on well-known or not very well-known facts, and the offer to draw conclusions oneself captivates with its honesty and unwillingness to fit the musician into an icon or portrait of an antihero. After all, every lover – and non-lover – of The Beatles has their own John Lennon and, as comical as it sounds, their own Yoko Ono, and both fans and non-fans of the great musician can find confirmation of their guesses about them here. In the end, it is not so important whether Lennon was an apostle of peace, kindness and love, or a hysterical neurotic who pulled out a lucky ticket in life. As his history also shows, genius and villainy, if we mean by this, including unsympathetic character traits, contrary to the words of the classic, are quite compatible.