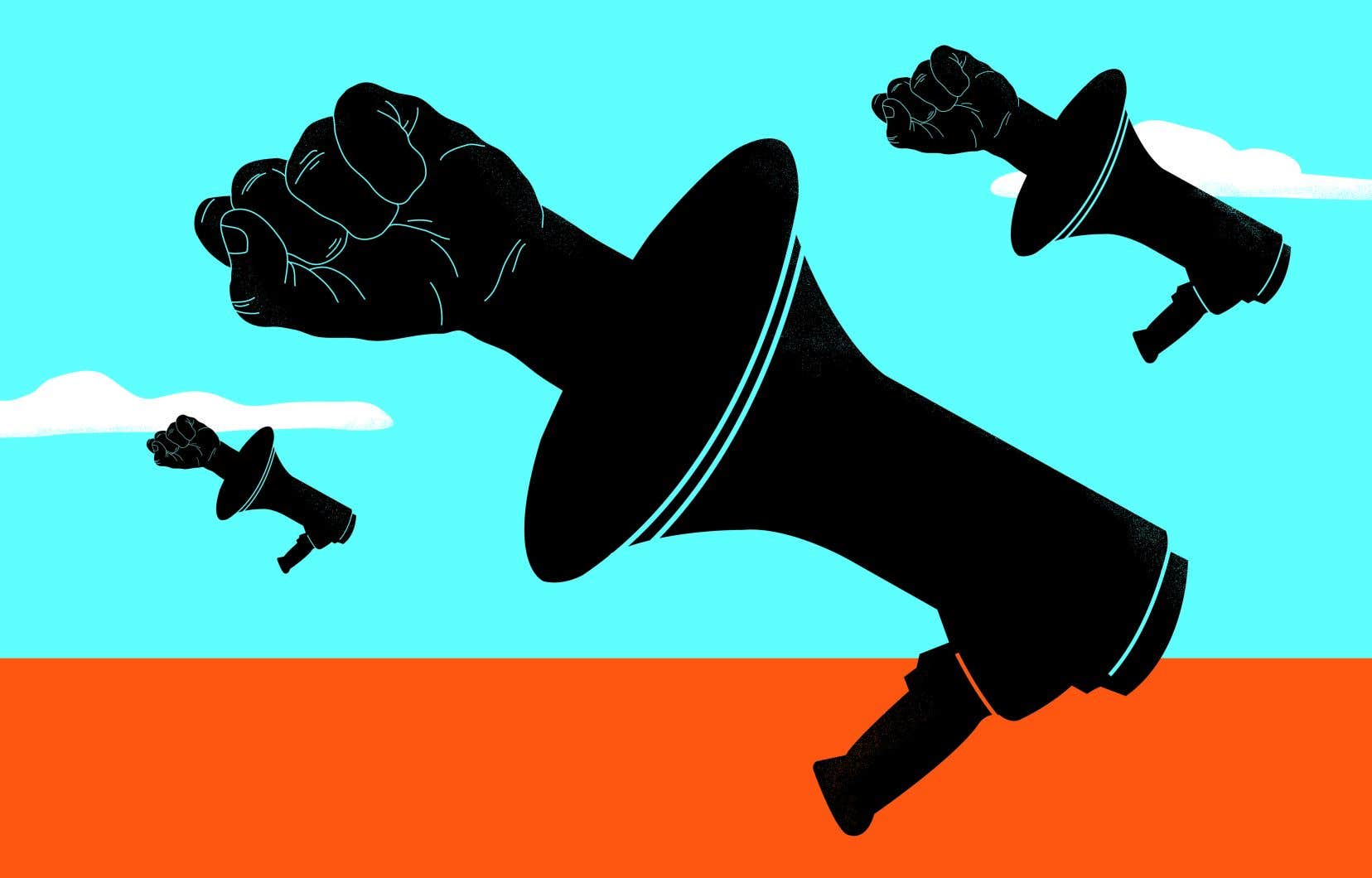 In category The duty of philosophy, we publish annually an abridged version of the winning text of the Philosopher contest, which is held in the college network. For the 2022 edition, the question was: Is the future woke ?

«Stay woke », warns the American singer Lead Belly in 1938 in his song Scottsboro Boys, denouncing the unfair treatment of the eponymous group of young African Americans accused of rape. “ Stay woke »claimed Martin Luther King in his speech at Oberlin University in Ohio in 1965. Stay woke “, tweets Erykah Badu in 2012 in support of the feminist rockers of Pussy Riot. A century later, the word woke, born of the African-American fight for equality, has become an essential media concept.

With regard to him, the perspectives diverge. For a branch of the left, this is an essential perspective for any critical citizen. For many on the right, it is an accusatory term used towards any progressive suspected of subscribing to naive moral puritanism. If the movement woke originally designates according to Michael Behrent “a positioning on the racial question”, it is more relevant to define it nowadays as an awareness of the injustices inherent in social structures. It is based on an intersectional conception of identity, according to which historical relations of oppression linked to ethnicity, religion, gender identity and sexuality define the experience of the individual.

Through its awareness of very real historical injustices, the wokisme seems to make it possible to deconstruct power relations and achieve a more egalitarian society. Nevertheless, as several critics of the movement assert, there is a risk of repressing certain traditional identities wrongly homogenized or of muzzling the freedom of thought and expression of groups considered privileged. Should we then let the moral and identity conceptions associated with this movement known as wokism direct social debates with the aim of creating a better society?

At first sight, we notice that a draconian application of the thought woke leads to the transgression of its own principles. Be woke necessarily implies holding a discourse that deviates from social expectations. Indeed, to deconstruct society down to its deepest assumptions and go beyond its presuppositions, one cannot comply with the codes of morality defined by the latter. For example, Simone de Beauvoir could not have criticized female alienation in The second sex without transcending the sexism that prevailed then. However, identity politics can lead to a moralism that prevents criticism of ideas woke, such as falsely accusing a speech of being discriminatory. Patrick Moreau, professor of literature, evokes the fact that one cannot debate the linguistic inappropriateness of the term “survivor” without risking being accused of supporting the “culture of rape”. Awakening from this dogmatic sleep would therefore result in another sleep if the principles woke could not be questioned. The dominated-dominant relationship will have been reversed without progress: oppression will only have changed victims. Isegory, that is to say equality of speech between citizens, could not therefore be abandoned without repeating the wrongs of the past.

John Stuart Mill defends such freedom of expression in of freedom, because from a utilitarian perspective, the imposition of an ideological orthodoxy would atrophy the discussion. Indeed, to censor an idea because it is contrary to the Zeitgeist, in the spirit of the times, runs the risk of eliminating either a true thought potentially fruitful from the perspective of a more just society, or a partially correct opinion which could, through dialectic, reveal the flaws of reasoning taken for granted. Furthermore, established ideas lose their value without freedom of expression, since “dogma will become a mere formal profession, ineffective for the good […] preventing the birth of any genuine and sincere conviction based on reason or personal experience”. That said, freedom has its limits: you can set aside an idea without completely censoring it. Thus, it is legitimate to withdraw from someone the privilege of using a broadcasting platform while respecting their freedom, since the freedom of the individual can be infringed if the latter uses it to harm others.

However, some argue that such broad free speech is unsustainable and does not take into account existing authority structures. Giving free rein to ideas does not inevitably lead to the recognition of social issues. In How Fascism Works, Jason Stanley reveals the flaw in Mill’s reasoning: “The market-of-ideas model argument for free speech therefore only works if the underlying disposition of society is to accept the force of reason over the power of irrational resentments and prejudices. Of course, this is not always the case. Moreover, oppressive social institutions will inevitably direct circulating ideas by using rhetoric or abuse of power to manipulate public opinion. For example, a politician can easily justify a war by creating an unfounded fear of foreigners. Such freedom, conceived only in a negative way, would therefore not allow the subversion of social inequities.

The paradox of intolerance

Freedom of thought is therefore not invariably beneficial. In the United States, it took being intolerant of segregationist policies to get rid of them. Following desegregation in education in Arkansas, the white population of Little Rock violently expressed their opposition and even threatened African-American students with death: if the federal state had tolerated this reaction, these unjust social norms would not would not have been overturned. Thus, according to Iris Marion Young, one cannot truly understand the mechanisms of oppression without considering the identity of the parties involved.

Freedom of thought and expression must certainly be defended, but not blindly. Karl Popper offers a solution to this thorny question by tackling the paradox of tolerance. In reality, the tolerance of intolerant ideas leads to the elimination of tolerance. It is therefore necessary “to claim, in the name of tolerance, the right not to tolerate the intolerant”. A total relativism is to be rejected, since it would give rise to an increase in violence and hatred. Popper instead advocates a critical pluralism based on “refutability”: any rationally held opinion should be allowed to circulate. According to this model, only dogmatic principles inciting to violate the integrity of others should be censored. It is therefore a question of avoiding social stagnation, without falling into the Manichaeism and dogmatism to which wokism can lead in its most militant version.

An overly sharp divide between dominant and dominated as well as a conception of the world based on intersectional identities characterize the movement woke current. It can easily lead to a binary morality that does not depend on the actions of the individual, but rather on membership in a group whose moral value depends on historical factors. The rector of the University of Ottawa, Jacques Frémont, demonstrated this in 2020 when he excluded certain groups from ethical debates by asserting that “dominant groups simply do not have the legitimacy to decide what constitutes a microaggression”.

Moreover, in this movement, the centrality of identity is to be criticized. First, it becomes too easy to deny a speaker his or her individuality and reduce his speech to his ethnic or gender identity, leading to the prevalence of arguments to man. The source of an assertion would then replace logic or empirical data as the condition of truth. Moreover, identity itself is a poor basis for debate. According to Michel Foucault, it is constructed by social power relations, under the influence of cultural norms. It is therefore necessarily fluid: identities would only be “momentary stabilities”. Moreover, as the movement woke seeks precisely to transform these relationships, this identity base is de facto unstable.

Finally, if we truly aspire to overcome social structures that discriminate according to identity, we cannot comfortably rely on it. Otherwise, the measures adopted would not, as the resentment Nietzschean, than an irrational reaction to the values ​​of the dominant classes resulting from a desire for revenge. If so, the morality of the oppressors would be condemned without it necessarily stemming from a critical reflection on its validity. The good would then emerge passionately, as opposed to the previous system and remaining dependent on contingent power relations. This irrationality therefore risks transforming oppression without attenuating or eliminating it.

A more egalitarian society cannot therefore see the light of day if we allow the principles of current wokism to dominate social debates. That said, his insistence on the importance of identities nevertheless highlights modes of oppression that mere economic or political models cannot completely capture. Integrating this way of thinking into the debates, while remaining within the limits of critical pluralism, would thus prove to be judicious and would allow a multidimensional vision of injustice, thus facilitating its elimination. As a result, it will still be necessary to break adequately with Morpheus before rushing too hastily towards Themis…