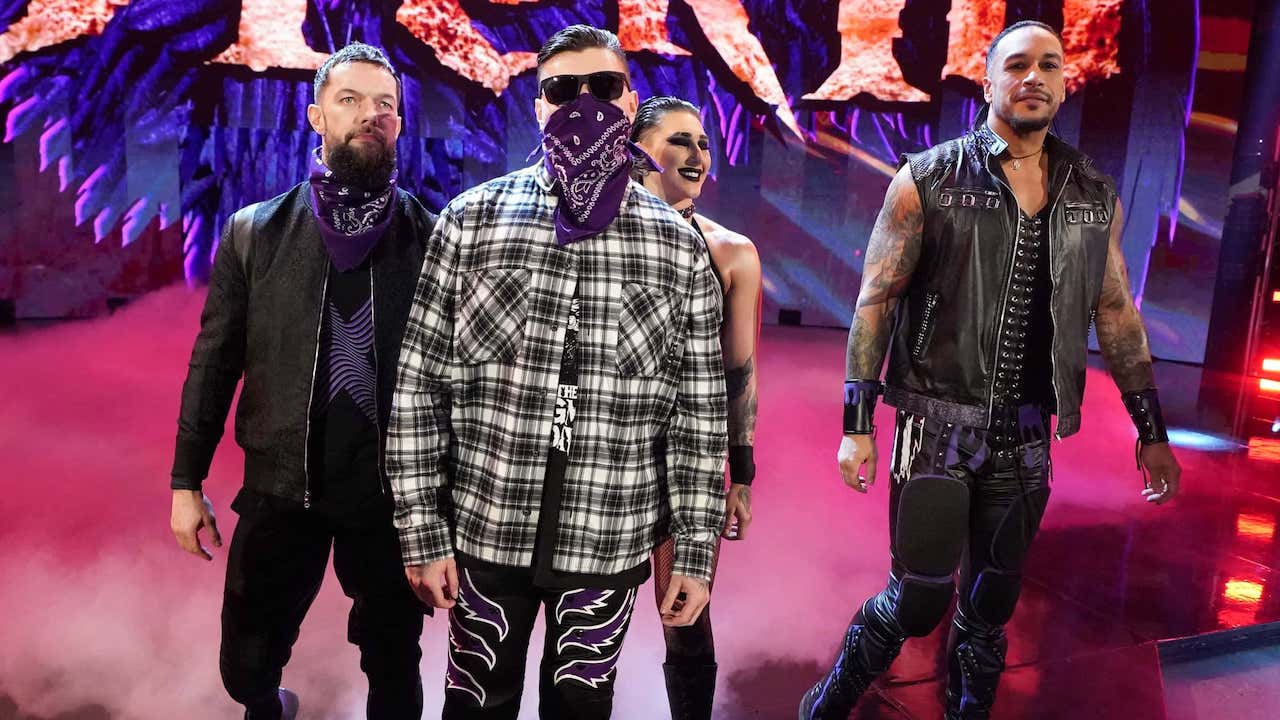 Complete results from the January 9, 2023 episode of WWE Raw.

On the program for this episode of WWE Raw on January 9, 2023, live from Birmingham (Alabama), the explanations of Alexa Bliss and the following events for Austin Theory, now rid of Seth Rollins.

A Baron Corbin on the road to Kevin Owens

Kevin Owens enters to start this episode and talk about his match against Roman Reigns at Royal Rumble 2023. It starts well. JBL quickly interrupts him before he has time to say more. It doesn’t start that well, actually.

JBL is going for his promo heel, people from Alabama, who even though they believe in things like Big Foot don’t believe in a victory for Kevin Owens. He brings in Baron Corbin who JBL thinks could beat Reigns. Corbin takes the mic, thinks he’ll win the Men’s Rumble and beat Reigns at WrestleMania. After an exchange of politeness a match between Owens and Corbin is decided.

Kevin Owens beat Baron Corbin by pinfall with the Stunner.

After the match, the Bloodline attacks Kevin Owens, but the latter manages to regain the upper hand by using a chair. Owens settles in the middle of the ring, sitting on the chair, which irritates Solo Sikoa who wants to return to the attack. The Usos hold him back and Adam Pearce comes back, pissed off, asking them to leave.

On the return of advertising Adam Pearce announces to the Usos that a match tag-team turmoil will take place tonight to determine their next challengers. He asks Solo Sikoa to stick around because tonight he faces Dolph Ziggler. The Usos are escorted out of the arena.

After a recap of the attack on Bianca Belair from last week, Alexa Bliss appears on the commentary table. She says Belair was afraid of her because she is “the face of the devil”. She says she’s going to take the RAW Championship title, a video of Uncle Howdy plays on the screen and he appears on the ramp to end the segment.

Bayley confronts Mia Yim, who goes by the name Michin because they insist on giving her a busted name. Bayley takes the microphone to make fun of Becky Lynch who she beat a few weeks ago before the match started.

Bayley a battu Michin by falling with a roll up with the feet in the ropes.

We are told that Johnny Gargano has been ruled out of competition due to injury. The wrestler suffers from a shoulder dislocation.

Candice LeRae crosses paths with Rhea Ripley who threatens her backstage. Ripley dates him at the Royal Rumble but LeRae looks set to fight tonight. The two wrestlers will face each other in a match later. Meanwhile Nikki Cross is still playing hide and seek.

Austin Theory makes its entrance. The crowd is crying out for Seth Rollins but Theory tells us he’s not coming tonight, that he was crawling on his old knees because he got beaten last week by ‘Austin ‘Freakin’ Theory’.

Surprise, Rollin is actually very present and makes his entrance, Theory is delighted to see him arrive on crutches. The rejoicing, however, will only last a while, Rollins pretended. He joins the ring but says nothing. He still stands on a crutch while Theory speaks again. Austin Theory claims to be the pinnacle of the discipline (MJF has ringing ears), and sees himself like many lately winning the Royal Rumble and then going on to beat Roman Reigns at WrestleMania 39.

Rollins finally speaks and confirms: He is indeed suffering, injured in the knee, but he reassures everyone: He will be recovered just in time for Royal Rumble, and just in time to challenge Roman Reigns at WrestleMania 39.

As the segment is believed to be over, Bobby Lashley enters, meets Seth Rollins in the aisle and heads to the ring where he spears the United States Champion. Lashley takes the microphone, says he’s happy to be back and doesn’t care who wins the Rumble because he’s back and plans to take care of the other 29 participants in the match.

Back to the action, Rhea Ripley enters alone to face Candice LeRae.

Rhea Ripley beat Candice LeRae by falling with his Riptide. Clean, it does not make a crease.

MVP wants to do business with Lashley

Behind the scenes MVP interrupts an interview with Bobby Lashley. MVP comes to tell him that he has had his suspension lifted and would like to be able to do business with him again. Lashley shakes her hand, but no more for now. Yet we know that the return of the Hurt Business is on the right track. Cedric Alexander and Shelton Benjamin will be teaming up in the tag-team turmoil from this evening.

A video clip of Cody Rhodes’ injury, surgery and recovery is released. There were already not many surprises, but with these videos on him, we are almost certain: Rhodes will return to the Royal Rumble.

Behind the scenes Mustafa Ali complains to Dolph Ziggler. He does not understand why he refused to team up with him tonight to participate in the tag-team turmoil and preferred to face Solo Sikoa, when he owed him at least that after having wasted his chance at the United States title. Ziggler makes it clear to him that tonight is not about him or the tag team titles, he wants more.

Byron Saxton interviews Bronson Reed but the Miz interrupts. He offers Reed to come with him to his Miz TV tonight, as a VIP, as a friend. But Reed makes him understand that there is no friendship that holds, if he wants his help, he only has to pay it.

Only Sikoa beat Dolph Ziggler by falling with a Samoan Spike. No win but Ziggler had his share of offense in the game.

The Usos came after the game, despite being kicked out of the arena by Adam Pearce.

Bayley is in an interview and sees her two wins over Lynch and Michin as a message to Lynch. Michin interrupts her and calls her a cheat and a liar. Damage CTRL beat up Michin, and Bayley advises him not to trust anyone anymore.

Dominik Mysterio, who was not at ringside for Rhea Ripley’s match earlier tonight, is a guest on Miz TV. Judgment Day is present in full, which surprises the Miz but Mysterio explains to him that if he learned one thing in prison, “it’s that you don’t move without your crew”. The Miz asks him how it’s in the prison, to which Mysterio replies “The snitches will get stitches (Snitches get stiches). Finn Bálor tries to calm him down and reminds him that he is out, he can tell without risk.

Mysterio then recounts that he was with dangerous criminals, and that he did not know what he was going to eat. If he ever wanted to see Rhea Ripley again, he was going to have to do the right thing. “I had to take my life by the testicles, like Maryse did with the Miz”. One of his cellmates threatened him, but he held his ground, faced him and pushed him back. “Now I know how Martha Stewart feels” (An American television host who spent a few months in prison in the 2000s, it’s probably funnier when you’re American).

The Miz has a little trouble with this story, he understands that Mysterio only spent a few hours in prison, nothing to whip a spade. Judgment Day threatens the Miz, “Maybe I was misinformed. he said to calm them down.

Damian Priest takes the floor and changes the subject. He intends to win the tag-team turmoil with Finn Bálor afterwards and warns the Usos. Luke Gallows and Karl Anderson interrupt, the main-event is about to start and there is quite a bit of time left.

Finn Bálor was visibly injured during the match. Adam Pearce comes to announce that if Bálor cannot continue, Judgment Day must be eliminated. But there is no question for Damian Priest who even says he is ready to continue on his own. Adam Pearce offers Dominik Mysterio to replace Finn Bálor in the match. After some hesitation Mysterio finally replaces Bálor in the last round of the tag-team turmoil.

Judgment Day wins tag-team turmoil and take on The Usos for the RAW and SmackDown Tag Team Championships. Finn Bálor comes to celebrate after the match with the rest of his team, and the Usos come to confront their new challengers.

A surprising choice, the next Tag Team Championship match will be heels vs. heels — even though the Bloodline is hugely popular with the public. The date of the match is not yet known.

A somewhat lighthearted episode of WWE Raw, the red brand clearly lacks a major champion. We do what we can with Alexa Bliss (despite the absence of Bianca Belair and Becky Lynch), but apart from the main event which fills a good third of the show, there is not much to remember.