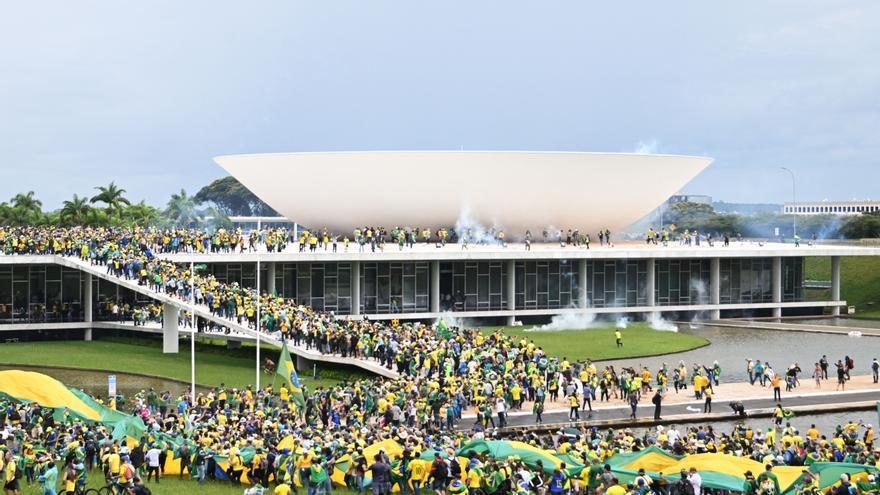 I have not been able to explain for a long time why the world continues to allow the ultra-rich or despicable characters like Putin, Xi Jiping, Kim Jong-un, Trump or Bolsonaro to exist. Directly, we can and should remove them from the equation. Nothing justifies that we have to carry these burdens for the survival of our civilization. Nothing. And with each example in Iran, Qatar or Brazil, last Sunday, it is clearer to me. We need to organize ourselves as the capable and sensible society that we are, and begin to point out, at the very least, dangerous civil wars and the useful idiots they rely on.

Bolsonaro has decided to pretend that nothing is going with him. The replacement in the presidency of Brazil does not go with him, nor do the mobilizations of the pánfilos and those who lead them. Bolsonaro has gone to the US, where we see him eating at a Kentucky Fried Chicken, oblivious to everything. But his omission is action: not being present has given wings to those who believe that Lula Da Silva is an illegitimate president. The transfer of power is not only symbolic: it means recognizing that you have lost and that it is someone else’s turn to lead the country, even if you do not like it. And Bolsonaro has decided that he does not recognize, does not let pass and that he is in the reserve, feeding himself, if they claim him.

Bolsonaro publishes a photo of himself eating alone (already, sure) in a KFC to pity him. It is the best political epitaph of him: he eats eagerly, as if defending the piece of chicken, he drops half that is irretrievable. In the background, someone wonders if it was a good choice to choose that site. pic.twitter.com/j3RT1hEVDa

If you vote for the fascist or you are a face or you are uninformed. There’s no more. And it happens with the Spanish and world extreme right, but also with those parties that do not recognize or condemn the existence of a Basque fascism that murdered those who thought differently. The position is worth more than decency. And deceiving the jerks is always easier than telling the truth: In Ctxt they explain “how the extreme right exploits the conspiracy that denies the climate crisis.” But they are not only deniers of climate change or democracy: “In ultra communication channels, scientific consensus is despised.” Those are your wickers.

Very Spanish and a lot of Spanish. Or not

I have nothing against Real Madrid. I consider him the intimate enemy of Athletic Club, my team. But it is still significant to me that, for the first time in 121 years of history, Carlo Ancelotti brought out a starting eleven without Spaniards (by birth) on the field. Spanish by nationality, like Valverde, yes there was. But the significant thing, for me, is that it took so long, really. In such globalized football, this fact has already occurred in many English teams, which have taken the field without Englishmen. So did Inter in Italy without Italians. I hope Athetic never does it without Basques.

The official match number 4,436 in the history of Real Madrid is the FIRST for the white team in its 121-year history without a single Spanish player in the starting eleven. pic.twitter.com/C9p27GGUnj

On a day like yesterday in 2007, Steve Jobs revolutionized our lives: the iPhone was born and with it the smartphone model that other brands would copy. The BlackBerrys that hardly anyone remembers anymore (however, I still miss mine) already existed, but they were quickly displaced by a device that, as one of the first users I met told me, simply, “cool ”. 16 years have passed, several generations of the iPhone and the price of the device is today unjustifiably crazy, but the vision of Jobs, who really designed everything as a perfectionist user, has remained.

On this day, on January 9, 2007, Steve Jobs presented the iPhone in one of the keynotes of @Apple 🍏 most famous in history. This is the press release 👇 https://t.co/VMIAHuy5Wb and the video of the presentation 👇 https://t.co/JHOs0ZdjwC
.
#efemeridesMolonas pic.twitter.com/AXk8yE12MD